By: Hirimori Hayashi
For: Brass quintet
This music is in your basket
View basket
Loading... 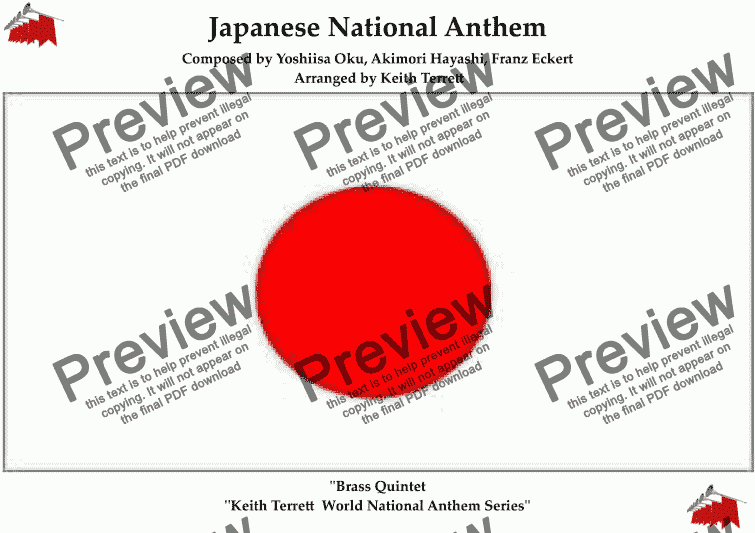 By: Hirimori Hayashi
For: Brass quintet

Composer
Hirimori Hayashi
Year of composition
1880
Arranger
Keith Terrett
Publisher
Music for all Occasions
Difficulty
Easy (Grades 1-3)
Duration
1 minute
Genre
Classical music
License details
For anything not permitted by the above licence then you should contact the publisher first to obtain permission.

Kimi ga Yo (Kimi ga Yo), often translated as "May your reign last forever" is Japan’s national anthem, and is also the world’s shortest national anthems in current use with 11 measures and 32 characters. The lyrics are based on a Waka poem written in the Heian period, sung to a melody written in the later Meiji Era. The current melody was chosen in 1880, replacing an unpopular melody composed eleven years earlier.

Although Kimi ga Yo had long been Japan’s de facto national anthem, it was only legally recognized as such in 1999 with the passing of a bill on national flag and anthem. After its adoption, there was controversy over the performance of the anthem at public school ceremonies. Along with the Hinomaru flag, Kimi ga Yo is claimed by some to be a symbol of Japanese imperialism and militarism.

It is not known who first wrote the words of the anthem. They first appeared in the Kokinshu, a collection “of ancient and modern poems” dating from the tenth century. From very early times, the poem was recited to commemorate auspicious occasions and at banquets celebrating important events. The words were often put to music and were also used in fairy tales and other stories and even appeared in the Edo-period popular fiction known as ukiyo-zoshi and in collections of humorous kyoka (mad verse).

When the Meiji period began in 1868 and Japan made its start as a modern nation, there was not yet anything called a “national anthem.” In 1869 the British military band instructor John William Fenton, who was then working in Yokohama, learned that Japan lacked a national anthem and told the members of Japan’s military band about the British national anthem “God Save the King.” Fenton emphasized the necessity of a national anthem and proposed that he would compose the music if someone would provide the words. The band members requested Artillery Captain Oyama Iwao, who was well versed in Japanese and Chinese history and literature, to select appropriate words for such an anthem. Fenton put his own music to the “Kimigayo” words selected by Oyama, and the first “Kimigayo” anthem was the result. The melody was, however, completely different from the one known today. It was performed, with the accompaniment of brass instruments, during an army parade in 1870, but it was later considered to be lacking in solemnity, and it was agreed that a revision was needed. In 1876, Osamu Yusuke, the director of the Naval Band, submitted to the Navy Ministry a proposal for changing the music, and on the basis of his proposal it was decided that the new melody should reflect the style used in musical chants performed at the imperial court. In July 1880, four persons were named to a committee to revise the music. They were Naval Band director Nakamura Yusuke; Army Band director Yotsumoto Yoshitoyo; the court director of gagaku (Japanese court music) performances, Hayashi Hiromori; and a German instructor under contract with the navy, Franz Eckert. Finally a melody produced by Hiromori Hayashi was selected on the basis of the traditional scale used in gagaku. Eckert made a four-part vocal arrangement, and the new national anthem was first performed in the imperial palace on the Meiji Emperor’s birthday, November 3, 1880. This was the beginning of the “Kimigayo” national anthem we know today.

There has been some opposition lately to the “Kimigayo” both within Japan and in other east Asian countries, for its association with militarism, and for the virtual worship of the emperor in the lyrics.