By: Michelle Novaro arranged by Keith Terrett
For: Brass quintet
This music is in your basket
View basket
Loading... 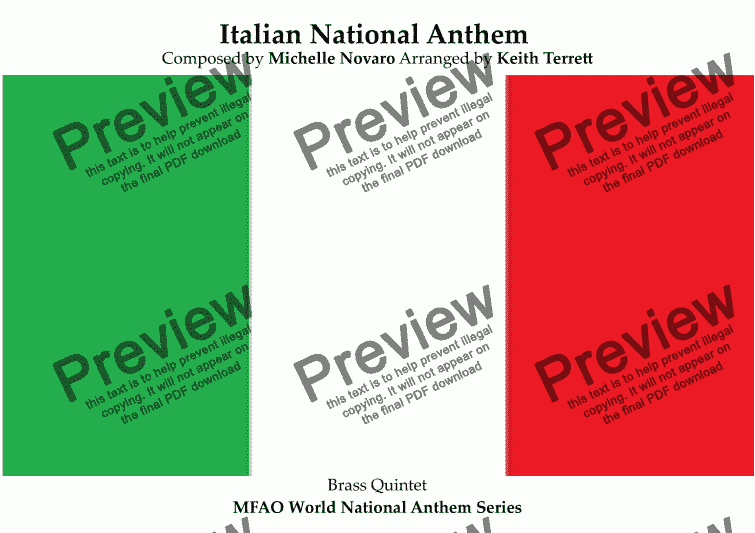 By: Michelle Novaro arranged by Keith Terrett
For: Brass quintet

Composer
Michelle Novaro arranged by Keith Terrett
Arranger
Keith Terrett
Publisher
Music for all Occasions
Difficulty
Moderate (Grades 4-6)
Duration
2 minutes
Genre
Classical music
License details
For anything not permitted by the above licence then you should contact the publisher first to obtain permission.

This arrangement is also available for String Orchestra and Recorder Consort; or almost any ensemble of your choice.

If you need a different arrangement, e-mail me:keithterrett@gmail.com

Il Canto degli Italiani (The Song of the Italians) is the Italian national anthem. It is best known among Italians as Inno di Mameli (Mameli’s Hymn) and often referred to as Fratelli d’Italia (Brothers of Italy), from its opening line.

The words were written in the autumn of 1847 in Genoa, by the then 20-year-old student and patriot Goffredo Mameli, in a climate of popular struggle for unification and independence of Italy which foreshadowed the war against Austria.

Two months later, they were set to music in Turin by another Genoese, Michele Novaro. The hymn enjoyed widespread popularity throughout the period of the Risorgimento and in the following decades.

After unification (1861) the adopted national anthem was the Marcia Reale, the Royal March (or Fanfara Reale), official hymn of the royal house of Savoy composed in 1831 to order of Carlo Alberto di Savoia.

Different versions exist as to how of how Goffredo Mameli, a young poet, came to write the anthem in 1847. One reports that Mameli took the anthem to the musician Michele Novaro, a friend, who lived in Turin. Novaro composed the music, and Mameli returned to Genoa where he presented words and music to his friends. Shortly thereafter, “Fratelli D’Italia” (Brothers of Italy, another common name for the anthem) was played for the first time, at a popular assembly. The tune gained popularity throughout the peninsula, in defiance of the Austrian, Bourbon and Papal police.

The other and equally persuasive story goes that one evening in 1847, in the house of the American consul, the center of discussion was the uprisings of the day. Urged by many of the consul’s guests, Mameli improvised a few lines on the spot and later wrote the rest. A few days later a friend took the poem to Turin and read it aloud at a nobleman’s party. The composer Michele Novaro who was a guest at the same party, tried a few notes on the piano and then, went home to compose the song. The anthem was sung for the first time the next day by a group of political exiles in the Caffè della Lega Italiana of Turin.

There are slight differences between Mameli’s original poem and how the anthem is sung today. The song is usually sung with the first verse repeated twice then the chorus repeated twice. (If subsequent verses are sung, they are only sung once, this is how the lyrics are presented below). It is also customary to end with “Sì!” (Yes!), perhaps to match the last note of the song.

There is talk lately of replacing the anthem, firstly because the music is not up to the standards of Italian classical music tradition (ironically, some of Italy’s greatest composers have composed anthems in this tradition, which are used by Central and South American countries, giving birth to the term “Latin American epic anthem”), and also the lyrics refer to specific events that were familiar to the Italians of the time that the anthem was composed, but bear little to no resonance with today’s Italians. However, “Il Canto degli Italiani” is very recognizable in Italy and would be hard to replace.