By: Trad
For: Brass quintet
This music is in your basket
View basket
Loading... 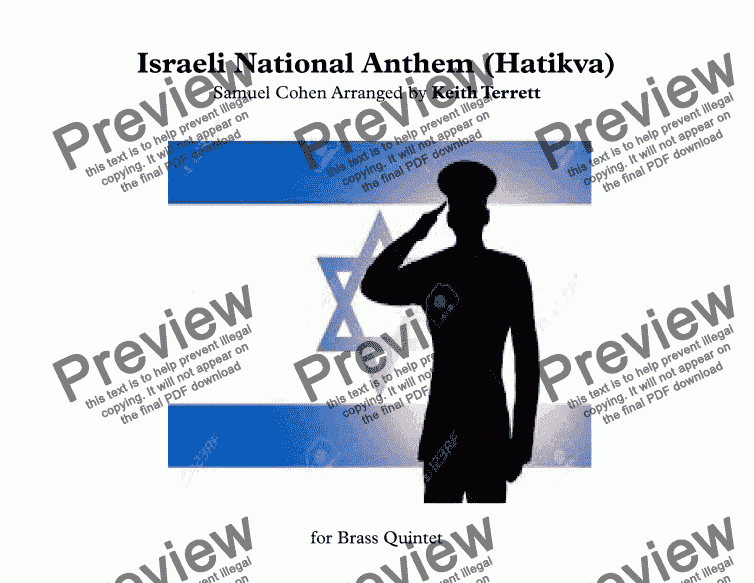 By: Trad
For: Brass quintet

Composer
Trad
Arranger
Keith Terrett
Publisher
Music for all Occasions
Difficulty
Moderate (Grades 4-6)
Duration
1 minute
Genre
World music
License details
For anything not permitted by the above licence then you should contact the publisher first to obtain permission.

Israeli National Anthem arranged for Brass Quintet. The melody for Hatikvah derives from La Mantovana, a 16th-century Italian song, composed by Giuseppe Cenci (Giuseppino del Biado) ca. 1600 with the text "Fuggi, fuggi, fuggi da questo cielo". Its earliest known appearance in print was in the del Biado’s collection of madrigals. It was later known in early 17th-century Italy as Ballo di Mantova. This melody gained wide currency in Renaissance Europe, under various titles, such as the Pod Krakowem (folk song) (in Polish), Cucuruz cu frunza-n sus [Maize with up-standing leaves] (in Romanian) and the Kateryna Kucheryava (in Ukrainian).[4] This melody was also famously used by the Czech composer Bedřich Smetana in his symphonic poem celebrating Bohemia, Má vlast, as Vltava (Die Moldau).

The adaptation of the music for Hatikvah was done by Samuel Cohen in 1888. Cohen himself recalled many years later that he had hummed Hatikvah based on the melody from the song he had heard in Romania, Carul cu boi [The Ox Driven Cart].

The harmony of Hatikvah follows a minor scale, which is often perceived as mournful in tone and is rarely encountered in national anthems. There is a modulating shift to Major key as the words Tikvatenu and Hatikva appear, both mingled with a romantic octave leap which gives new dramatic energy to the melodic line. As the title "The Hope" and the words suggest, the import of the song is optimistic and the overall spirit uplifting.