By: Claude - Joseph Rouget De L’isle
For: Brass quartet
This music is in your basket
View basket
Loading... 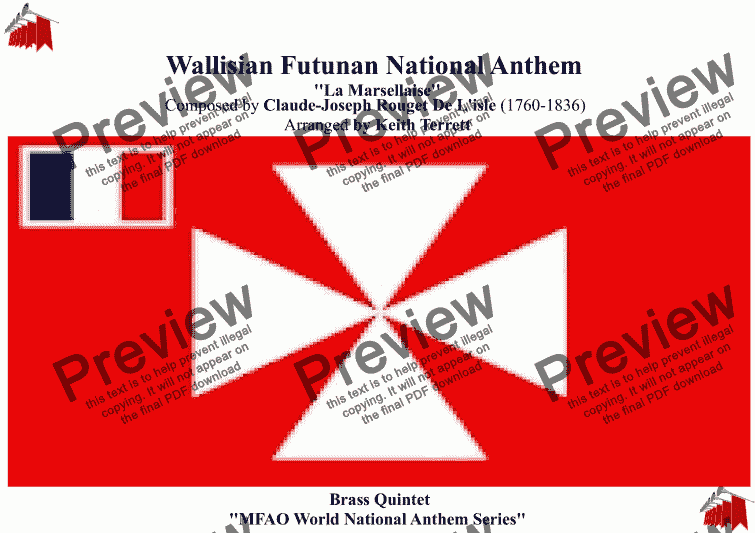 Composer
Claude - Joseph Rouget De L’isle
Arranger
Keith Terrett
Publisher
Music for all Occasions
Difficulty
Moderate (Grades 4-6)
Duration
1 minute
Genre
World music
License details
For anything not permitted by the above licence then you should contact the publisher first to obtain permission.

An arrangement of the National Anthem of the Wallis & Futuna Islands for Brass Quintet (Wallisian Futunan).

Futuna and Alofi were put on the European maps by Willem Schouten and Jacob Le Maire during their famous circumnavigation of the globe with the ship the Eendracht in 1616. After having come from Niuafoou, they suddenly changed their course from west to northwest and so stumbled on this island pair. They called it Hoorn Eylanden, after the city of Hoorn, Schouten’s birthplace, which became Horne in both French and English. Wise from their earlier experiences, they started with a show of force to the natives who approached them, which resulted in a peaceful barter with coconuts, yams and hogs from one side and iron nails, beads and knives from the other. They found a beautiful bay, a natural harbour along the southwest coast of Futuna, which they called after the ship the Eendrachts baai (Unity bay). This must be the Anse de Sigave near Leava of today. They went ashore on to get water and met the king, who told his subjects that their guests were not to be disturbed by petty thieving. In this amiable way the Dutch were able to replenish their stocks. A few days later the king of the other island, Alofi, came to visit with 300 men. The two kings were extremely courteous to each other, and a big feast was prepared. A kava ceremony and umu were organised. Schouten and LeMaire were probably the first Europeans ever to witness these, and the description they gave still rings familiar tones nowadays.

Not having been bothered by thieving and hostilities, Schouten and LeMaire had the opportunity to study Futuna a little bit more careful than the Niua islands. (They did not go to Alofi). But their description of the islanders is not flattering. Although they praise the men for being well proportioned, the women they found ugly, ill-shaped with breasts hanging down to their bellies as empty satchels. They all went naked and copulated in public, even in front of their revered king.

Two kings, elected with a lot of envy from the local nobility every few years, rule the population under the benevolent eye of the French. They are the king of Sigave, the western province, and the king of Alo, the eastern province including Alofi. Except for Poi all villages are along the southwest coast, and they are from west to east: Toloke, Fiua, Vaisei, Nuku, and Leava (capital with the wharf) in Sigave, and Taoa, Malae, Ono, Kolia and Vele (at the airstrip) in Alo.

As on Uvea, all Futunans are deeply religious Catholic and the number of churches, chapels and oratories is overwhelming. Although the island is closer to Tonga and farther from Smoa than Uvea, the vernacular and culture are more Smoan. The languages spoken are Futunan and French.