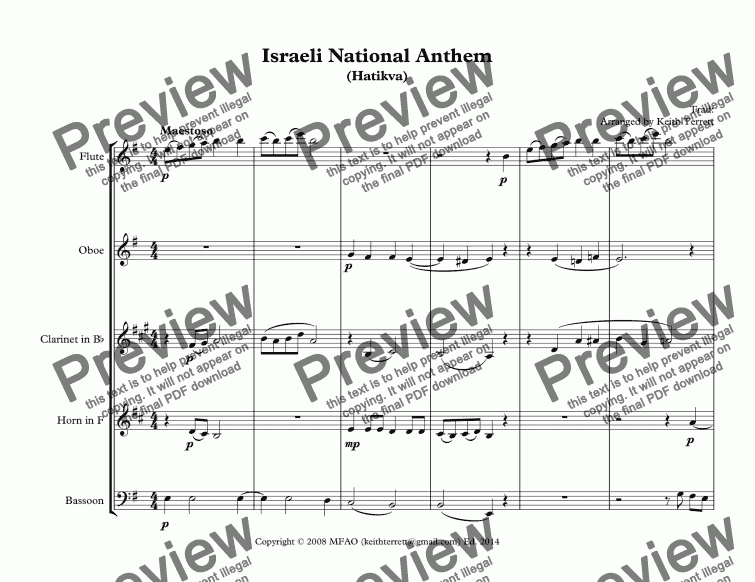 "Hatikvah" "The Hope") is the national anthem of Israel. Its lyrics are adapted from a poem by Naftali Herz Imber, a Jewish poet from Złoczów, then part of the Kingdom of Galicia and Lodomeria, Austria-Hungary, (today, Zolochiv, Ukraine). Imber wrote the first version of the poem in 1877, while the guest of a Jewish scholar in Iași, Romania. The romantic anthem's theme reflects the Jews' 2000-year-old hope of returning to the Land of Israel, restoring it, and reclaiming it as a sovereign nation.

In its modern rendering, the official text of the anthem incorporates only the first stanza and refrain of the original poem. The predominant theme in the remaining stanzas is the establishment of a sovereign and free nation in the Land of Israel, a hope largely seen as fulfilled with the founding of the State of Israel.

The melody for Hatikvah derives from La Mantovana, a 16th-century Italian song, composed by Giuseppe Cenci (Giuseppino del Biado) ca. 1600 with the text "Fuggi, fuggi, fuggi da questo cielo". Its earliest known appearance in print was in the del Biado's collection of madrigals. It was later known in early 17th-century Italy as Ballo di Mantova. This melody gained wide currency in Renaissance Europe, under various titles, such as the Pod Krakowem (folk song) (in Polish), Cucuruz cu frunza-n sus [Maize with up-standing leaves] (in Romanian) and the Kateryna Kucheryava (in Ukrainian). This melody was also famously used by the Czech composer Bedřich Smetana in his symphonic poem celebrating Bohemia, Má vlast, as Vltava (Die Moldau).

The adaptation of the music for Hatikvah was done by Samuel Cohen in 1888. Cohen himself recalled many years later that he had hummed Hatikvah based on the melody from the song he had heard in Romania, Carul cu boi [The Ox Driven Cart].

The harmony of Hatikvah follows a minor scale, which is often perceived as mournful in tone and is rarely encountered in national anthems. There is a modulating shift to Major key as the words Tikvatenu and Hatikva appear, both mingled with a romantic octave leap which gives new dramatic energy to the melodic line. As the title "The Hope" and the words suggest, the import of the song is optimistic and the overall spirit uplifting.

The origins of "Hatikvah" far predate its use as the Israeli national anthem, in use since soon after its founding as the first Jewish state in modern history. The music is based on a folk song of unknown origin, but appears several times in European folk songs and religious music. The arrangement by Shmuel Cohen from 1888 is probably based on a Romanian folk song he heard during his childhood in Romania, most likely "Carul cu boi" ("The Ox Driven Cart"). The melody also somewhat resembles Smetana’s symphonic poem "Ma Vlast", which in turn was based on a Swedish version of the Romanian song.

The lyrics of the anthem were taken from the first verse and chorus from Naftali Herez Imber’s 1878 poem "Tikavatenu" (Our Hope), which had nine stanzas. At the first Zionist congress of 1897, it was adopted as the anthem of Zionism. The lyrics (primarily of the chorus) underwent a few changes between that time and the creation of the Jewish state of Israel some 50 years later, primarily a change where the song once spoke of a hope to return Zion, it now speaks of a hope to live as a free nation there. 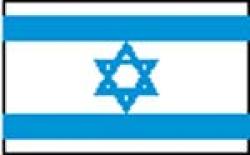