By: trad
For: String orchestra
This music is in your basket
View basket
Loading... 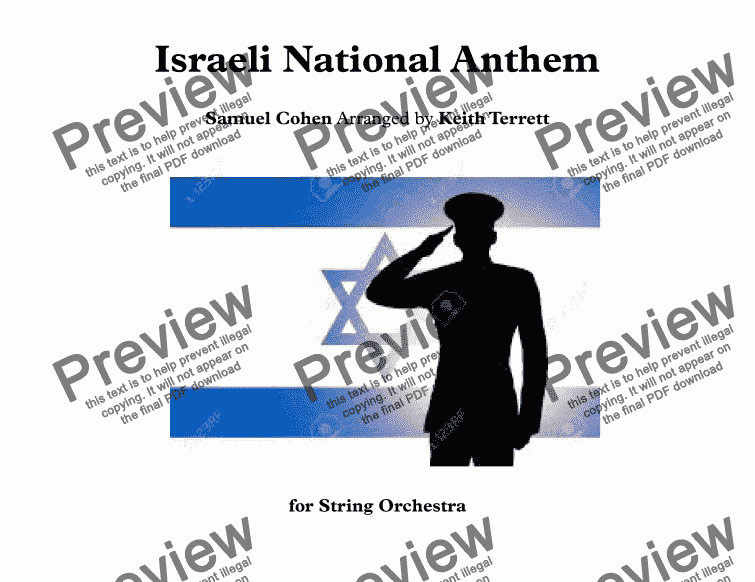 By: trad
For: String orchestra

Composer
trad
Arranger
Keith Terrett
Publisher
Music for all Occasions
Difficulty
Easy (Grades 1-3)
Duration
1 minute
Genre
World music
License details
For anything not permitted by the above licence then you should contact the publisher first to obtain permission.

"Hatikvah" (The Hope), arranged for Strings.

Words by: Naftali Herz Imber Music by: traditional, arranged by Shmuel Cohen In use since: 1948, adopted 2004.

The origins of "Hatikvah" far predate its use as the Israeli national anthem, in use since soon after its founding as the first Jewish state in modern history. The music is based on a folk song of unknown origin, but appears several times in European folk songs and religious music. The arrangement by Shmuel Cohen from 1888 is probably based on a Romanian folk song he heard during his childhood in Romania, most likely "Carul cu boi" ("The Ox Driven Cart"). The melody also somewhat resembles Smetana’s symphonic poem "Ma Vlast", which in turn was based on a Swedish version of the Romanian song.

The lyrics of the anthem were taken from the first verse and chorus from Naftali Herez Imber’s 1878 poem "Tikavatenu" (Our Hope), which had nine stanzas. At the first Zionist congress of 1897, it was adopted as the anthem of Zionism. The lyrics (primarily of the chorus) underwent a few changes between that time and the creation of the Jewish state of Israel some 50 years later, primarily a change where the song once spoke of a hope to return Zion, it now speaks of a hope to live as a free nation there.

If you need an anthem not in my store, e-mail me your requirements:keithterrett@gmail.com