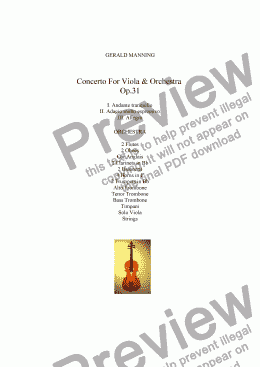 Composer
Gerald Manning
Year of composition
2008
Lyricist
Gerald Manning
Publisher
MANNING SCHOOL
Difficulty
Difficult (Grades 7+)
Duration
24 minutes
Genre
Classical music
License details
For anything not permitted by the above licence then you should contact the publisher first to obtain permission.

Why is it that the viola has not achieved recognition as a solo instrument; for many fine early examples of viola concerti exist by such composers as Johann Sebastian Bach, who in his sixth Brandenburg Concerto writes a Solo part for two violas, Georg Philipp Teleman�s concerto in G major, and several concertos by Carl Stamitz? Apart from that old chestnut often expounded, and often meant as a term of abuse and ridecule,is that viola players are failed violinists. Alfred Einstein, among others, makes the argument from the viewpoint of the word �Concerto� in which he stipulates, that the essence of the concerto is not the display of virtuosity but conflict and resolution, and the viola is less suited than the piano, or even the violin, to balance itself against an orchestra that is not deliberately underscored by the composer. Mozart who played the viola and was therefore familiar with the instrument�s tendency to elusiveness was well aware of this problem of balance, which is revealed by his instructions in the score of his Sinfonia Concertante for violin and viola, in which the viola soloist is instructed to tune his instrument up a semitone, so that the increased tension of the strings should give its tone more edge and render it the more easily able to cope with its brilliant partner the violin. No work shows more clearly his mastery of orchestral balance.

Another fine example is the misunderstanding which occurred between Berloiz and Paganini over the defination of a generic name in the score of Berloiz�s Harold in Italy, which, by no stretch of the imagination can be termed a viola concerto. In his Memoirs Berlioz himself gives an account of the origins of the work:

�On 22 December 1833 Paganini came to see me. "I have a wonderful viola, he said, a superb Stradivarius instrument, which I would like to play in public. But I have no suitable music. Would you like to write a solo for viola? You are the only one I can trust for this task." "Certainly, I replied, I am flattered more than I can say, but to rise to your expectations and to show off in a work of this kind a virtuoso such as yourself, one needs to be a viola player, which I am not. In my view you alone can solve this problem." "No, I insist, said Paganini, you will do a fine job; for my part I am too unwell at the moment to compose music and cannot think of it." Beloiz continues, �My intention was to write a series of orchestral scenes, in which the solo viola would be involved as a more or less active participant while retaining its own character. By placing it among the poetic memories formed from my wanderings in the Abruzzi, I wanted to make the viola a kind of melancholy dreamer in the manner of Byron�s Childe-Harold. Hence the title of the symphony: Harold in Italy. � I tried therefore to please the celebrated virtuoso by writing a solo for viola, but one which involved the orchestra in such a way as not to reduce the effectiveness of the orchestral contribution. I was sure that Paganini, with his incomparable powers as a performer, would know how to keep the viola in the forefront. The challenge seemed to me novel; I soon worked out an attractive plan and became very keen to carry it out. Hardly was the first movement completed that Paganini wanted to see it. But when he saw all the rests in the viola part in the allegro he exclaimed: "This will not do; I am silent for too much of the time; I need to be playing continuously." "I knew it, I replied. What you want is a viola concerto, in which case you are the only one who can write well for yourself." Paganini did not answer; he seemed disappointed and left me without saying any more about my symphonic sketch. A few days later he left for Nice, already suffering from the throat infection from which he later died, and only came back after three years.� As I use a large orchestral palate that includes full woodwind including a Cor Anglais, four Horns, two Trumpets, three Trombones, Timpani and Strings and because like Berloiz I have no wish to �reduce the effectiveness of the orchestral contribution� I have entitled the work Concerto for Viola & Orchestra � the emphasis being placed on the noun Orchestra, as I consider both protagonists as equal partners in this augment, which brings me to the question of orchestral balance. Of course I am not suggesting in these brief notes that because of the viola�s idiosyncrasies, which resulted in problems of definition and poor projection, composers were reluctant to choose use it in concertante works, and it is arguable whether players were any better or worse than they are today, suffice it to say, the fact remains that the instrument was much maligned and downgraded for whatever reason, but there is no doubt in my mind that today�s virtuosi with the new material which has become available to them, will firmly establish the great alto singer of the string family in the public�s affection - perhaps for the first time!