By: Jean-Antoine Zinnen
For: Brass quintet
This music is in your basket
View basket
Loading... 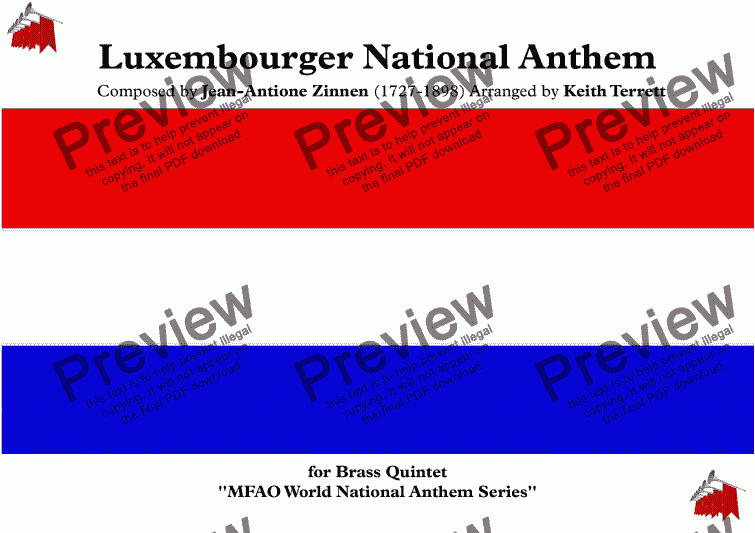 By: Jean-Antoine Zinnen
For: Brass quintet

Composer
Jean-Antoine Zinnen
Year of composition
1864
Arranger
Keith Terrett
Publisher
Music for all Occasions
Difficulty
Easy (Grades 1-3)
Duration
1 minute
Genre
Classical music
License details
For anything not permitted by the above licence then you should contact the publisher first to obtain permission.

The National Anthem of the Grand Duchy of Luxembourg arranged for Brass Quintet.

Ons Heemecht" is the national anthem of Luxembourg. The title in Luxembourgish translates as Our Homeland. Michel Lentz wrote the words in 1859, and they were set to music by Jean Antoine Zinnen in 1864. The song was first performed in public in Ettelbruck, a town at the confluence of the Alzette and Sauer rivers (both of which are mentioned in the song), on 5 June 1864.

The first and the last stanza of Ons Heemecht were adopted as Luxembourg’s national anthem in 1895. It was added as one of the official ’national emblems’ (French: emblèmes nationaux), alongside the national flag, national coat of arms, and the Grand Duke’s Official Birthday, on 17 June 1993.

“Ons Heemecht” was written in 1859 and set to music in 1864. The first performance of the song was on June 5 of that year in Ettelbruck, where the Alzette and Sauer (two rivers mentioned in the opening of the song) meet. It was adopted as the national anthem in 1895, and proclaimed a “national emblem” on June 17, 1993. (The anthem was recently officially named “Ons Heemecht” over the old spelling “Ons Hémécht”.) The official lyrics are verses 1 and 4 of the original work.