By: trad
For: Brass quintet
This music is in your basket
View basket
Loading... 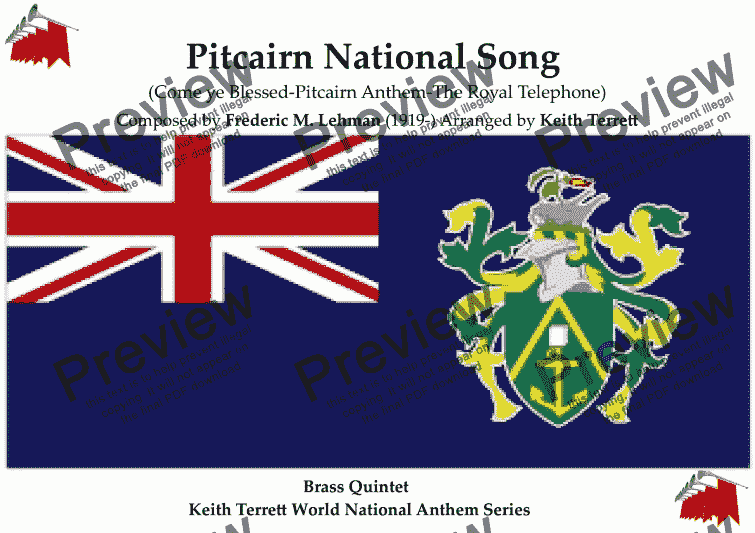 By: trad
For: Brass quintet

Composer
trad
Arranger
Keith Terrett
Lyricist
Keith Terrett
Publisher
Music for all Occasions
Difficulty
Easy (Grades 1-3)
Duration
1 minute
Genre
Classical music
License details
For anything not permitted by the above licence then you should contact the publisher first to obtain permission.

God Save Our Gracious Queen arranged for Brass Quintet.

The Pitcairn Islands are a remote British colony in the South Pacific, famous for being the site where the mutineers from the HMS Bounty landed. The islands’ population have always been very small (currently numbering around 50), yet, aside from the official anthem of God Save the Queen (which is not heard often on the islands), there have been, and continue to be, many unofficial anthems in use in the colony.

In Diana Jolliffe Belcher’s 1871 book “The Mutineers of the Bounty and their Decendants in Pitcairn and Norfolk Island” it is reported that a local poem by Rev. G. H. Nobbs was set to the tune “Rousseau’s Dream” (sheet music) and was considered by Pitcairners to be their anthem at the time. It is not known for how long this was considered as their anthem, however. Also, in 1856, several Pitcairners resettled on Norfolk Island as Pitcairn had become too small. The local anthem now in use on Norfolk Island, Come Ye Blessed, is also referred to as the “Pitcairn Anthem”, and more than likely was brought to the island by the Pitcairn settlers, suggesting that this anthem was in use on Pitcairn at that time.

Currently, the song “We From Pitcairn Island” (to the tune of the hymn “The Royal Telephone”) is used as an unofficial anthem at gatherings and the like. The lyrics were written by Pitcairner Melva Evans with assistance from the local Seventh Day Adventist Pastor L. A. J. Webster in 1962 to be performed by the school children on board a visiting cruise ship, but the song became identified by residents as their unofficial anthem. Other songs, such as “The Goodbye Song” (written by Pitcairner Amelia Young) and the hymn “In The Sweet By and By” are considered unofficial “Pitcairn songs” at gatherings as well.