By: anon
For: Brass quartet
This music is in your basket
View basket
Loading... 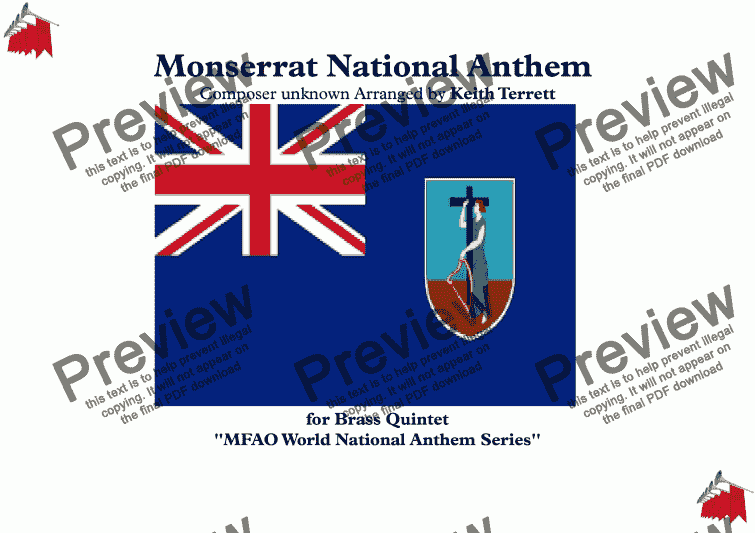 By: anon
For: Brass quartet

Composer
anon
Arranger
Keith Terrett
Publisher
Music for all Occasions
Difficulty
Easy (Grades 1-3)
Duration
1 minute
Genre
Classical music
License details
For anything not permitted by the above licence then you should contact the publisher first to obtain permission.

God Save The Queen for Brass Quintet.

In 1992, the government of Montserrat, a British colony in the Caribbean, started a competition for a national song. Various entries were submitted, but no winner was ever officially proclaimed by the government. (One of the entries, “Montserrat My Country” by Denzil Edgecombe was even used in sporting events and local ceremonies and was mentioned in a local paper as the winner, a few days before a volcanic eruption in 1995 forced the evacuation of the capital city, but was not announced by the government as the winner.) A major volcanic eruption in 1997 which buried half the island in volcanic ash put the national song contest on indefinite hold, and national songs were used less and less on the island.

Finally, in 2013, the government of Montserrat restarted the contest by opening up the contest again to submissions, and five entries (none of which were “Montserrat My Country”) were put up for consideration for the people both in Montserrat and the evacuated citizens around the world who did not return to vote on, culminating in a song showcase on July 27. The winner, “Motherland”, was proclaimed two days later. The song was written by Sir Howard Fergus, one of Montserrat’s former governors, and composed by Dr. George Irish, a Caribbean studies lecturer based in New York. The song makes reference to Montserrat culture and history. The song is used as a local anthem, used in sporting events and local ceremonies, while the national anthem of the island remains “God Save the Queen”.