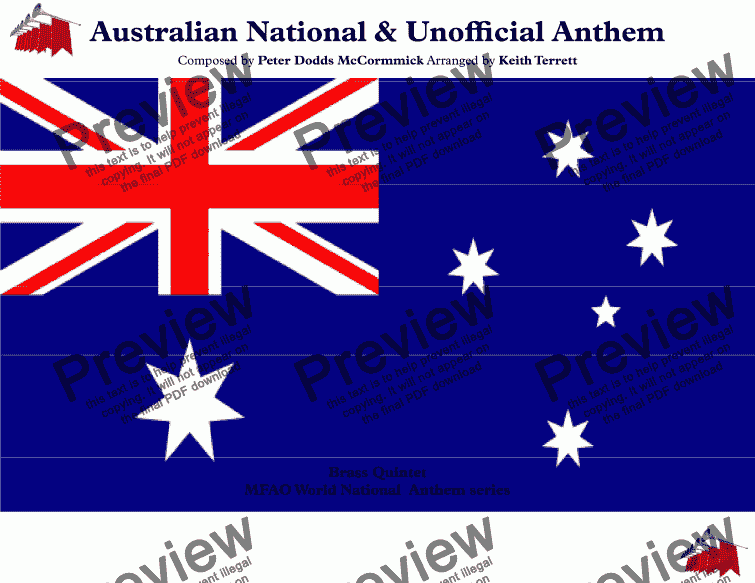 All national anthems are available for almost any instrumental combination. E-mail me your requirements after you purchase a score:keithterrett@gmail.com

If you need an anthem not yet in my store, let me know and I will arrange it; you subject to copyright restrictions.

The original song Advance Australia Fair was composed by Peter Dodds McCormick under the pen-name ’Amicus’ (which means ’friend’ in Latin), in the late 19th century, and first performed by Andrew Fairfax at a Highland Society function in Sydney on 30 November 1878. The song quickly gained popularity and an amended version was sung by a choir of 10,000 at the inauguration of the Commonwealth of Australia on 1 January 1901. In 1907 the Australian Government awarded McCormick £100 for his composition.

In a letter to R. B. Fuller Esq., dated 1 August 1913, McCormick described the circumstances that inspired him to write Advance Australia Fair:

Before its adoption as Australia’s national anthem, Advance Australia Fair saw considerable use elsewhere. For example, Australia’s national broadcaster, the Australian Broadcasting Commission, used it to announce its news bulletins until 1952. It was also frequently played at the start or end of official functions. Towards the end of World War II, it was played in picture theatres after "God Save the Queen" and the American national anthem.

"Waltzing Matilda" is Australia’s best-known bush ballad, and has been described as the country’s "unofficial national anthem".

The title was Australian slang for travelling on foot (waltzing, derived from the German auf der Walz) with one’s belongings in a "matilda" (swag) slung over one’s back. The song narrates the story of an itinerant worker, or "swagman", making a drink of billy tea at a bush camp and capturing a jumbuck (sheep) to eat. When the jumbuck’s owner, a squatter (wealthy landowner), and three mounted policemen pursue the swagman, he commits suicide by drowning himself in a nearby billabong (watering hole), after which his ghost haunts the site.

The original lyrics were written in 1895 by Australian poet Banjo Paterson, and were first published as sheet music in 1903. Extensive folklore surrounds the song and the process of its creation, to the extent that it has its own museum, the Waltzing Matilda Centre in Winton, Queensland, where Paterson wrote the lyrics. In 2012, to remind Australians of the song’s significance, Winton organised the inaugural Waltzing Matilda Day to be held on 6 April, the anniversary of its first performance.