By: Nikolaos Mantzaros
For: Brass quintet
This music is in your basket
View basket
Loading... 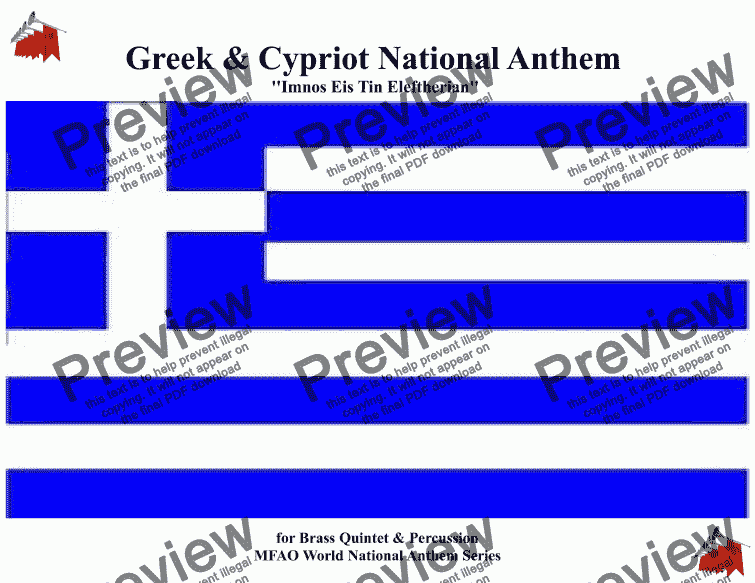 By: Nikolaos Mantzaros
For: Brass quintet

Composer
Nikolaos Mantzaros
Arranger
Keith Terrett
Publisher
Music for all Occasions
Difficulty
Easy (Grades 1-3)
Duration
1 minute
Genre
World music
License details
For anything not permitted by the above licence then you should contact the publisher first to obtain permission.

The National Anthems of Greece and Cyprus arranged for Brass Quintet.

Hail, Oh Hail, Liberty! The Greek Anthem is based on the "Hymn to the Freedom", a large - 158 strophes - poem written by Dionysios Solomos, a distinguished poet from Zakynthos Island. The poem was inspired by the Greek Revolution of 1821 against the Ottoman Empire. During 1828 the eminent musician from Kerkyra Island Nicolaos Mantzaros composed the music for the Solomos’ Hymn.

Although King Othon (Otto) decorated both them for their work (1845 and 1849), he did not think (or, maybe, did not wanted) to replace the Royal Anthem of that time with the Solomos/Mantzaros Hymn. That Anthem was a musical derivative from the German one, with a text glorifying Othon and its Dynasty.

After the overthrow of the Othon’s Dynasty, the new King George I and the Greek establishment decided to neglect the fashion of that time - to use the Royal Anthems also as National - and looked for a clearly Greek work, both with respect to the poetry and the music. The "Hymn to the Freedom" was readily there - extremely popular since the Revolution times, often recited or sung during patriotic meetings and celebrations.

"Eleftheria" - the Freedom - is a female word and also a popular female name in Greece. The Solomos’ Eleftheria is not as erotic and earthly as the Delacroix Liberty. It rather reminds an exiled ancient Goddess, which Solomos identifies with Greece itself. A majestic and demanding Goddess, an object of respect and admiration rather than of belief and passion. She has to be imperative, as the poet reviews the whole history of the Greek Revolution, comments on the negative attitude of the Great Forces, describes the pains and the offerings of the rebels, criticizes their dissensions, calls for unanimity and consolidation - always pointing to Eleftheria - the major human value.

The Greek Anthem has been written by a man of 25 years only. The Greeks deeply love and respect their emotionally-youthful Anthem.

The unusual - for an Anthem - 6/4 tempo of the Mantzaros music points clearly to the most manly traditional dance of the Greeks - Tsamiko.

Cyprus is a bi-national community of Greeks and Turks, where Greeks are the majority and the ruling government. When Cyprus was declared independent from Great Britian in 1960, other national symbols such as the flag were enshrined in the new nation’s constitution, but there was no mention of an anthem. Much debates ensued, and neither community could agree on a national anthem; during foreign state visits, different instrumental marches were used. In the early 1970s, it was decided that the Greek anthem would be used by Cyprus as well. (The Turkish community does not recognize this and instead uses the Turkish anthem for their self-proclaimed nation.)

In 2004, as a requirement of joining the European Union, a peace plan was proposed by UN Secretary General Kofi Annan, which included different national symbols, to make them more inclusive of both communities. This also included a wordless anthem that was agreed to by both Turkish and Greek members of the national symbols committee. However, the plan was rejected by the voters and "Ode to Freedom" remains the Cypriot national anthem. Stay tuned for further developments.