By: Josip Runjanin
For: Brass quintet
This music is in your basket
View basket
Loading... 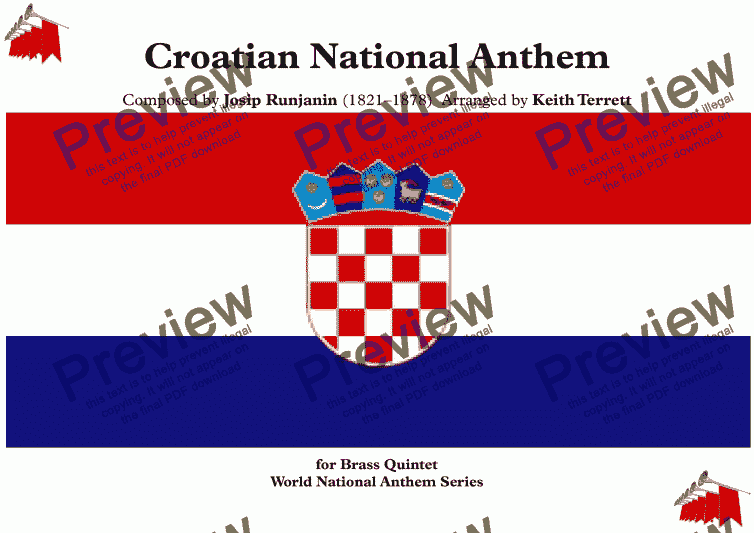 By: Josip Runjanin
For: Brass quintet

Composer
Josip Runjanin
Year of composition
1846
Arranger
Keith Terrett
Year of arrangement
2014
Publisher
Music for all Occasions
Difficulty
Easy (Grades 1-3)
Duration
1 minute
Genre
Classical music
License details
For anything not permitted by the above licence then you should contact the publisher first to obtain permission.

The National Anthem of Croatia scored for Brass Quintet. There are also versions for String & full Orchestra in my store.

Lijepa naša domovino" ("Our Beautiful Homeland") is the national anthem of Croatia. It is often referred to as just "Lijepa naša" ("Our Beautiful") in Croatia, which is also a phrase widely used as a metonym for the country.

The original lyrics were written by Antun Mihanović and first published under the title "Horvatska domovina" ("Croatian homeland") in 1835. The author of music has not been indisputably determined although the late 19th century tradition suggests that it might have been the music amateur Josip Runjanin (1821–1878). It has not been known what was the original form of the melody because the first copy has not been recovered to this day.

The complete song was reportedly scored and harmonized by Vatroslav Lichtenegger in 1861 and based on the singing of his students, trainee teachers. It was first performed as the Croatian anthem in the same year, under the title "Lijepa naša". The original anthem has 15 verses. Since then it has come to be known under the slightly longer present title and a few minor adjustments have been made to the lyrics.

During World War II, in the Independent State of Croatia it was also used as state anthem, but never officially recognized as one.

he lyrics to the anthem were first printed in Danica (The Morning Star) magazine in 1835, under the title “Hrvatska domovina” (“Croatian Homeland”). The music was composed later (1840s) by Josip Runjanin, a Croatian Serb, on the basis of Donizetti’s “O sole piu ratto” from the opera “Lucia di Lammermoor”. Later, in 1861, the score went through some minor changes done by V. Lichtenegger. In 1891 the song was first sung as the unofficial national anthem at an exhibition held by the Croatian-Slavonian Economic Society in Zagreb. (Croatia, still being part of the Austro-Hungarian Empire, had that nation’s anthem as its official one.) It remained unofficial until February 29, 1972, when the first amendment to the Croatian Constitution declared it official (despite being part of Yugoslavia at the time) with a slight change in the lyrics upon 1990 independence.

Josip Runjanin or Josif Runjanin (Serbian Cyrillic: Јосиф Руњанин; 8 December 1821–2 February 1878) was a Croatia Serb composer and soldier from the Austrian Empire. He is best known for composing the melody of the Croatian national anthem and of the Serbian patriotic song "Rado Srbin ide u Vojnike" (Gladly will the Serb Enlist in the Army). He was lieutenant-colonel in the Habsburg Army.