By: Father Enric Marfany Bons
For: Brass quintet
This music is in your basket
View basket
Loading... 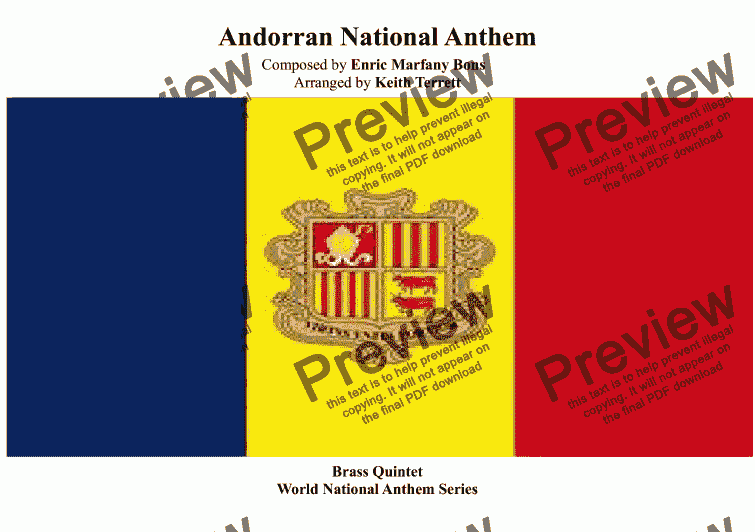 Composer
Father Enric Marfany Bons
Arranger
Keith Terrett
Publisher
Music for all Occasions
Difficulty
Moderate (Grades 4-6)
Duration
2 minutes
Genre
Classical music
License details
For anything not permitted by the above licence then you should contact the publisher first to obtain permission.

The National Anthem of Andorra arranged for Brass Quintet.

“El Gran Carlemany” presents the nation’s history in a first-person narrative. The anthem was officially adopted on September 8, 1921, the anniversary date of the feast of Our Lady of Meritxell (the Virgin Mary), the patron saint of Andorra.

Despite the anthem having been written just before the official change in Catalan orthography, the lyrics using the old orthography are still official in Andorra and in active use.

The Principality of Andorra is a very small landlocked state in south western Europe, located in the eastern Pyrenees mountains in between France and Spain. Once isolated and impoverished, it is currently a prosperous country mainly because of tourism and its status as a tax haven. Andorra is also part of the Catalan Countries.

Joan Baptista Benlloch i Vivó (29 December 1864 – 14 February 1926) was a Valencian Cardinal of the Roman Catholic Church who served as Archbishop of Burgos from 1919 until his death, and was elevated to the cardinalate in 1921. Born in Valencia, Joan Benlloch i Vivó studied at its seminary, and obtained his doctorate in theology and in canon law in October 1887. He was ordained to the priesthood on 25 February 1888, and then served as an auxiliary professor at the Valenica seminary and coadjutor in Almàssera, teaching humanities and metaphysics. From 1893 to 1898, Benlloch was pastor of the parish of Santos Juan Evangelista y Bautista in Valencia. He then taught at the seminary of Segovia, where he was also chantre of the cathedral chapter, provisor and vicar general (1899-1900), and vicar capitular (1900-1901).

On 16 December 1901, Benlloch was appointed Apostolic Administrator of Solsona and Titular Bishop of Hermopolis Maior. He received his episcopal consecration on 2 February 1902 from Bishop Jaime Cardona y Tur, with Bishops José Cadena y Eleta and Salvador Castellote y Pinazo serving as co-consecrators, in Madrid. Benlloch was later named Bishop of Urgell on 6 December 1906; in this position, he was also Co-Prince of Andorra and composed the text for its national anthem. His tenure saw his country enter World War I on the side of the Allies, but Andorra was not included in the Treaty of Versailles and officially remained in a state of belligerency until 1957. The French Co-Princes of Andorra during Benlloch’s leadership include Armand Fallières and Raymond Poincaré.[citation needed]

Benlloch was eventually advanced to Archbishop of Burgos on 7 January 1919. Pope Benedict XV created him Cardinal Priest of Santa Maria in Aracoeli in the consistory of 7 March 1921. Benlloch was one of the cardinal electors who participated in the 1922 papal conclave, which selected Pope Pius XI. He served as a special envoy of the Spanish Government to the Latin American republics from September 1923 to January 1924.

He wrote the music to "El Gran Carlemany", the national anthem of Andorra.

The Cardinal died in Madrid, at the age of 61. He is buried in the Real Basílica de la Virgen de los Desamparados in Valencia, Spain