Sign in / Register
HomeInstrumentationsOrchestraMANNING, G. - Symphonic Poem - The Legend of Knockgrafton, Op.33 - for Vioces and Orchestra

MANNING, G. - Symphonic Poem - The Legend of Knockgrafton, Op.33 - for Vioces and Orchestra 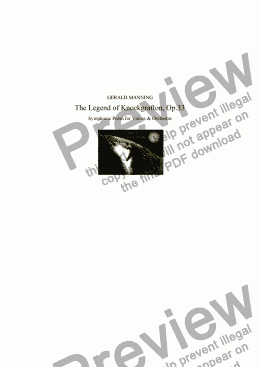 MANNING, G. - Symphonic Poem - The Legend of Knockgrafton, Op.33 - for Vioces and Orchestra

Composer
Gerald Manning
Year of composition
2009
Lyricist
Anonymous
Publisher
MANNING SCHOOL
Difficulty
Difficult (Grades 7+)
Duration
19 minutes
Genre
Classical music
License details
For anything not permitted by the above licence then you should contact the publisher first to obtain permission.

THE LEGEND OF KNOCKGRAFTON Op. 33 Symphonic Poem for Voices and Orchestra Based on an ancient and anonymous �rude melody� and text. Music: Gerald Manning

Shakespeare, Mendelssohn and Purcell among others were all inspired by the fertile imaginations of folklorists and antiquarians. Superstitions and enthralling tales were rampant when Shakespeare was penning A Midsummer Night�s Dream in c.1596. Kevin Crossley-Holland in his excellent anthology Folk-Tales of the British Isles puts it so succinctly when he says; �Folk-tales were seen not only as worthy of study in their own right but as springboards for the creative � especially the literary � imagination and as illustrations of human behaviour that, but with little doctoring, would appeal to children�. These tales are indeed so apt to the young imaginative mind, which yearns to escape from drudgery of modern life for the sylvan fields, which are inhabited with fairies and goblins and all manner of strange little people. What adds a certain �je ne sais quoi� in the rendition of these myths and legends is the addition of a pleasant singing voice or a minstrel�s harp. When I first read The Legend of Knockgrafton I became aware that the feelings I was experiencing were those of calm and quiet. To me at least it seemed to possess the mete of a prose poem; the moonlit night when Lusmore pays homage to that orb in the short Arietta �Rising in clouded majesty, at length, apparent queen, unveil�d her peerless light, and o�er the dark her silver mantle threw�; and then that unearthly repetitious melody coming deep from inside the moat Da Luan, Da Mort, Da Luan, Da Mort (Monday, Tuesday) repeated ad-nauseam without any change he tired of hearing it, although it had charmed him when he first heard it. He would wait until the round had been sung three times and use the �luftpausa� at the end of the refrain to raise it adding the words Da Cadine (Wednesday). He would then continue singing the melody �tutti� with the voices inside the moat and finish the melody with Da Cadine. Within Knockgrafton the fairies were delighted with the addition to their fairy melody by a musician of consummate skill, which far exceeded theirs, and decided to bring the mortal into the presence of the fairy court. They observed at once that Lusmore had a large hump on his back, and after they had made a great fuss over him plying him with a wonderful repast and everything he could wish for, they consulted among themselves as to what could be done about the hump. After their consultation�s one of their number approached Lusmore and said:

�Lusmore! Lusmore! Doubt not, nor deplore, For the hump which you bore On your back is no more; Look down on the floor, And view it, Lusmore!�

He was overpowered with the joy and beauty, which now surrounded him, and he soon fell into a sound sleep. When he awoke in broad daylight at the foot of the moat he was aware of the sun shining and the sweet music of birdsong. Had he been dreaming? When he put his hand behind his back the hump, which he had borne since his birth, had indeed been miraculously removed, and what is more he was attired in a new suit of clothes which he assumed the fairies had given him � he was overjoyed! His adventure soon became known throughout the country, and one morning an old woman asking directions to Cappagh approached him. �You do not need directions my good woman for this is Cappagh, and who do you seek here?� The woman explained that she was from Decie�s country in the county of Waterford, and she had heard tell of one Lusmore who had a hump removed from his back by the fairies. She went on to explain that she also knew of a young man with the same affliction who would surely die if it were not removed. Lusmore told the old woman all the particulars of how his own hump had been removed, and after she had thanked him she went away happy in the knowledge that she would try to do the same for the young man she knew. Jack Madden was his name, but unlike Lusmore he happened to be a peevish and cunning creature from his birth. He was impatient when he arrived at the moat where sure enough he could hear the fairies singing Lushmore�s arrangement of their melody, but after hearing them sing it seven times without stopping his impatience was his undoing, as he burst in with adding �augus Da Hena� (Thursday) without considering the timing or humour of the music. He was under the misguided allusion that two days were better than one. When the fairies heard the new addition to their melody they were furious and whisked him down into the moat where they gathered around him screaming and screeching and shouting out �who spoiled out tune?� Then one of them pronounced their judgement:

�Jack Madden! Jack Madden! Your words come so bad in The tune we feel glad in; This castle you�re had in, That your life we may sadden; Here�s two humps for Jack Madden!�

With that twenty of the strongest fairies lifted Lusmore�s hump onto Jack Madden�s back. He died soon after cursing the fairies and those who would go to listen fairy tunes again. It is wise to remember that certain rules apply when humans have dealings with fairies, which must be observed, and those who ignore them do so at their own peril � this is what the Legend of Knockgrafton introduces us to, the price of disrespect.

Reviews of MANNING, G. - Symphonic Poem - The Legend of Knockgrafton, Op.33 - for Vioces and Orchestra