By: Gerald Manning
For: String quartet
This music is in your basket
View basket
Loading... 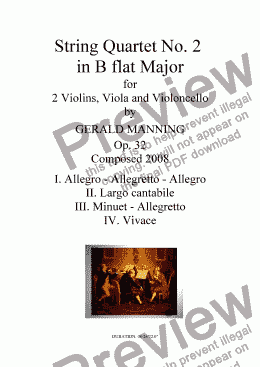 By: Gerald Manning
For: String quartet

Composer
Gerald Manning
Year of composition
2008
Lyricist
Gerald Manning
Publisher
MANNING SCHOOL
Difficulty
Difficult (Grades 7+)
Duration
25 minutes
Genre
Classical music
License details
For anything not permitted by the above licence then you should contact the publisher first to obtain permission.

The form of the genre for a group of 4 string players consisting of 2 violins�, a viola and a violoncello was first developed during the early part of the 18th century by such composers as Alessandro Scarlatti and Giuseppe Tartini and achieved its vernalization with Haydn, Mozart, Schubert and Beethoven. Like the symphony in the orchestral repertoire, the string quartet soon established itself in chamber music, as a vehicle of the highest medium for a composers inspirational thought processes, and Edwin Evans (1874-1945) the English critic and writer on music observes in his writings that � Long experience has established the string quartet as the most perfect, concise, and self-contained combination in all music.� The genre inspired many composers to compose in the medium, which in turn created many fine ensembles� of performers that included the Joachim, Brodsky, Bohemian, Lener, Griller, Amadeus, Gabrieli, and Vermeer string quartets�, to name but a few.

Composition on my second String Quartet in B flat Major, Op.32 began in earnest after the completion of the Viola Concerto, Op.31 on the 18th November 2008, and was completed on the 18th December 2008, in West Sussex. The work is in four movements; an Allegro first movement is followed by a Largo cantabile which is song like in character, and although I considered the inclusion of a third movement scherzo, I finally decided to adhere to the more traditional classical Minuet & Trio with an Allegretto marking which gives the movement a dance like character. The work concludes with an energetic Rondo, which has the characteristic of a Furiant, and was often used by composers in place of a scherzo.