Woodwind Episode No. 4 (One Christmas Day) 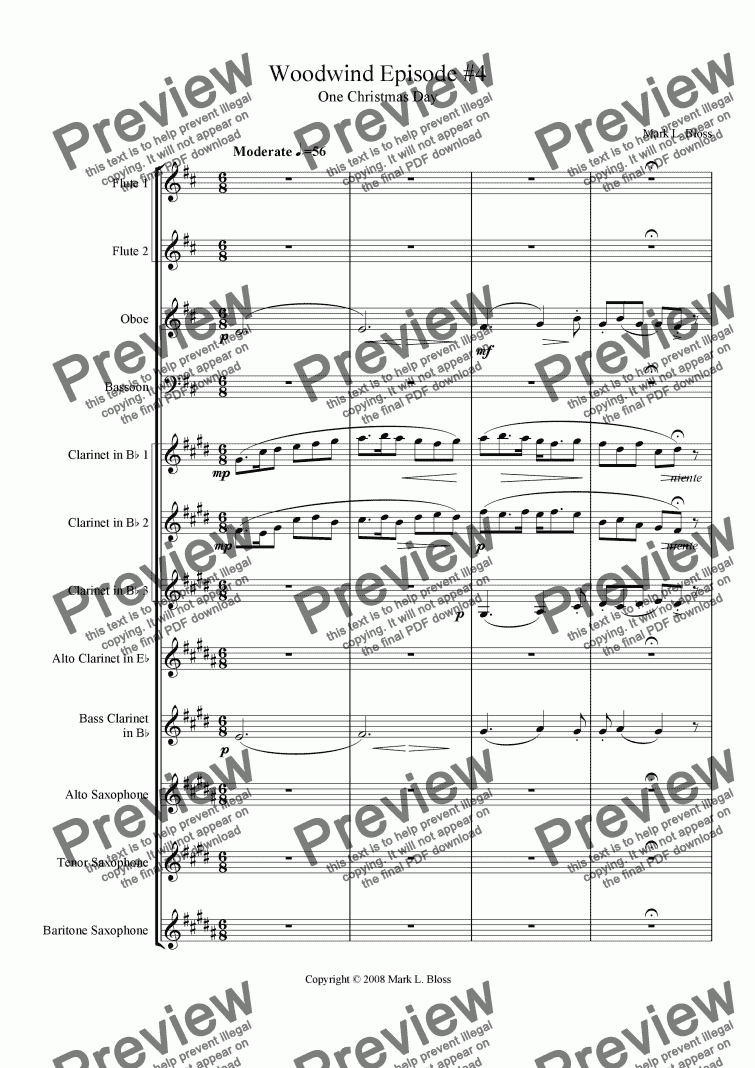 On Christmas Eve and Christmas Day, 2008, I conjured from my noggin the jumble of simultaneous and thus noisy carols of the season blurringly assaulting my senses. This used to be the unfortunate result. On September 2010 I revisited the work for some much desired improvement. The MP3 has been updated, as has the score. Tempo has been brought slower to about 56 ticks bringing it to nearly six minutes in duration. Volume begins low and one may be tempted to turn the volume down half-way through, but it is unlikely to damage your speakers.

It is intended for a small ensemble of woodwinds. Expressions, dynamics, phrasing, accurate tempo and note durations are important for the presentment of this work. As an example of how particularly important I feel about these nuisances, see at measures 33 and 34 as the Bass Clarinet is asked to reduce its volume a measure after everyone else; and at the barline of measure 27 and again at 30, a Conductor's symbol placed at the point I insist everyone take a breath at once. Later in the work I leave off the Conductor's symbol but the same simultaneous breath is intended. Slurs are accurate representations of how much air must be present in the lungs to accomplish the task at hand. I have tried to be careful with collisions in the score, but I likely will have missed some, especially since I did all the fixes and forgot it remained untransposed, which I hurriedly repaired at the last moment.

It can be performed at a quicker pace without losing, but more proficient performers would be recommended for a faster tempo. Observant listeners will hear dissonances where I placed them;. and the work may seem from a different time, yet it is born of the 21st century. May your holiday be pleasant and prosperous as always is my hope, despite this parade-like addition to the season's profusion of tunes.

In order to submit this score to ScoreExchange.com Mark Bloss has declared that they own the copyright to this work in its entirety or that they have been granted permission from the copyright holder to use their work. If you believe that this score should be not available here because it infringes your or someone elses copyright, please report this score using the copyright abuse form.

Reviews of Woodwind Episode No. 4 (One Christmas Day)