A Serenade for Brass Quintet

By: Franz Schubert
For: Brass quintet
This music is in your basket
View basket
Loading... 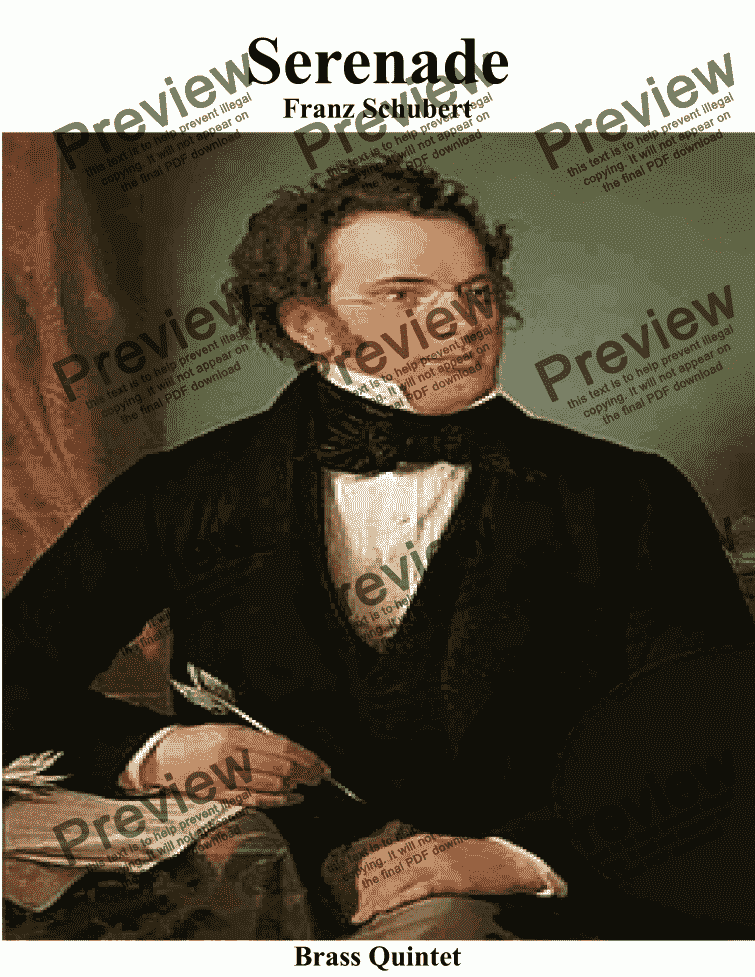 A Serenade for Brass Quintet

By: Franz Schubert
For: Brass quintet

Composer
Franz Schubert
Year of composition
1828
Arranger
Keith Terrett
Year of arrangement
2007
Lyricist
Keith Terrett
Publisher
Music for all Occasions
Difficulty
Moderate (Grades 4-6)
Duration
3 minutes
Genre
Classical music
License details
For anything not permitted by the above licence then you should contact the publisher first to obtain permission.

Schubert’s immortal "Serenade" was written in 1826. it is so familiar that it needs no analysis, nor is one necessary from any point of view. It is simply a lovely melody from first note to last, written upon the inspiration of the moment, and yet characterized by absolute perfection of finish and a grace and beauty of which one never tires. It was originally composed as an alto solo and male chorus and was subsequently rearranged for female voices only. The circumstances of its composition as told by Schubert’s biographer, Von Hellborn, are of more than ordinary interest. Von Hellborn says:

"One Sunday, during the summer of 1826, Schubert with several friends was returning from Potzleinsdorf to the city, and on strolling along through Wahring, he saw his friend Tieze sitting at a table in the garden of the ’Zum Biersack.’ The whole party determined on a halt in their journey. Tieze had a book lying open before him, and Schubert soon began to turn over the leaves. Suddenly he stopped, and pointing to a poem, exclaimed, ’such a delicious melody has just come into my head, if I but had a sheet of music paper with me.’ Herr Doppler drew a few music lines on the back of a bill of fare, and in the midst of a genuine Sunday hubbub, with fiddlers, skittle players, and waiters running about in different directions with orders, Schubert wrote that lovely song."

Reviews of A Serenade for Brass Quintet