By: Harry Sdraulig
For: String quartet
This music is in your basket
View basket
Loading... 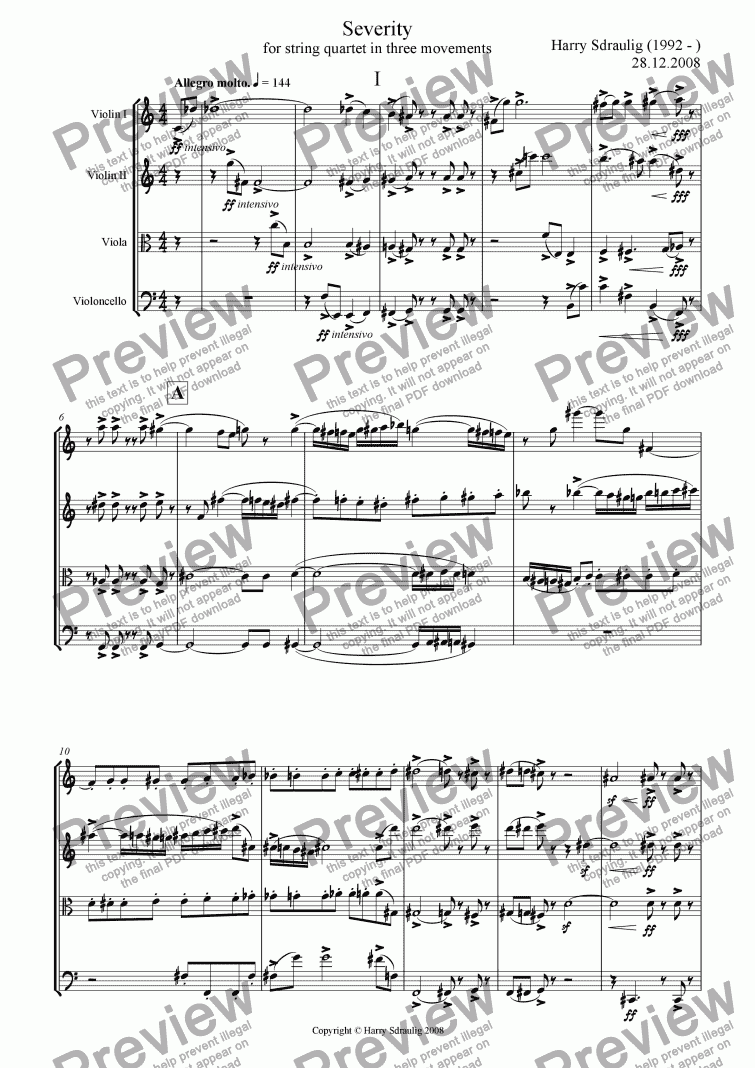 By: Harry Sdraulig
For: String quartet

Composer
Harry Sdraulig
Year of composition
2008
Lyricist
none
Publisher
Balwyn High School
Difficulty
Difficult (Grades 7+)
Duration
3 minutes
Genre
Modern classical music
License details
For anything not permitted by the above licence then you should contact the publisher first to obtain permission.

The first movement, Allegro molto, begins with the trading between the four instruments of the interval of a minor ninth, building up an important harmony which then squashes into itself as the parts move in contrary motion by semitones. These first three bars contain the substance of all the material used in all the movements. At figure A a running passage is introduced - a motivic idea based on the semitone movement of the opening bars which appears constantly throughout the work. The two basic elements outlined - minor 9ths and contrary motion movement by the semitone - dominate the whole of the first movement. At figure B the semitone figure rises and at figure C a simple rising and falling figure is introduced, still based on the opening material, that gains greater significance in its form later on.

At figure D the texture changes to become more subdued where fragments of the main theme are scattered, following by a scurrying tower of minor 9ths, the interval that dominates virtually all of the harmony during the piece, at figure E. A sudden build up leads to a brief but ferocious statement of the material at figure F which quickly subsides. The next few phrases act as a build up to a sort of recapitulation of the opening gesture at figure J. The most aggressive stage of the movement appears at letter K with the appearance of harsh double stopped chords. At letter M the theme attempts to recover itself but fails as the music is drawn home by a furious crescendo.