By: John Pitts
For: Large mixed ensemble
This music is in your basket
View basket
Loading... 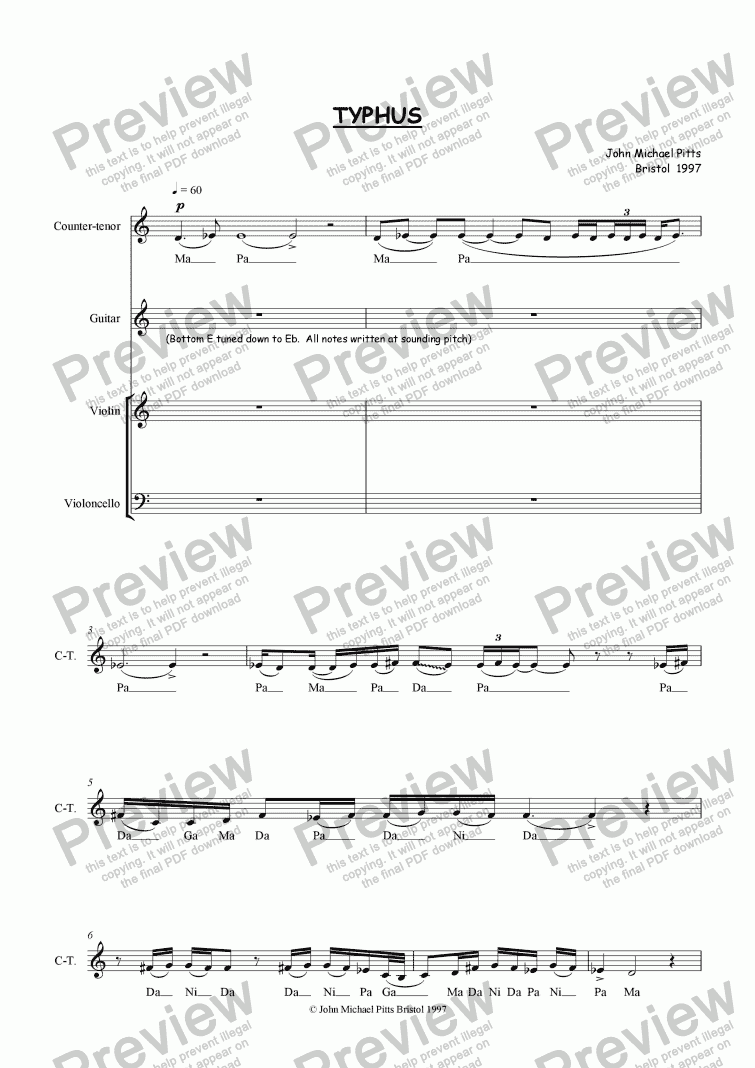 Composer
John Pitts
Year of composition
1997
Lyricist
none
Difficulty
Difficult (Grades 7+)
Duration
6 minutes
Genre
World music
License details
For anything not permitted by the above licence then you should contact the publisher first to obtain permission.

Typhus, written in 1997, for counter-tenor, guitar, violin and cello), shortlisted by the spnm (see www.spnm.org.uk). It uses or imitates various elements of Indian music, most notably its texture of a characteristic melody line and the sounds of the accompanying percussion. The introduction (the Alaap) outlines the scale and the main melodic motifs (Pakarh), slowly exploring each note and interval. The scale itself is not Indian, but has been treated according to basic rules of raga playing. Gradually from these elements a melody is pieced together. Some types of embellishment have been used (eg: Tan - very fast tremelo or trill effects). The words sung to the melody line in the upper voice are the names of each note: Sa Re Ga Ma Pa Da Ni Sa = Do Re Mi Fa So La Ti Do

Each instrument comes in one by one, adding individual slants to the texture, before the accompanimental figures begin to imitate, and have the role of the tabla (the versatile Pakistani drum), slowly making a ten-beat rhythmic cycle (or Tala) become more distinct and audible. Dha Dhin Too Na etc are the vocalised tabla sounds (bols), sung in the bass voice, imitated also in the instrumental parts. Typhus follows the common practice of getting faster - many ragas have three sections, each faster than the previous one (Alaap, Barakhayal & Chotakhayal). Characteristic techniques such as Tehai have been used - where a short rhythmic (or both rhythmic and melodic) phrase of an odd length is repeated three times, creating syncopation, and lands back on the beat. The roles of melody, accompanimental harmony/secondary melody, and rhythmic tabla sounds are moved around each of the instruments. The melody becomes increasingly decorated, more and more colourful and complex, the whole increasing in speed, with added clarity of the ten-beat cycle and snowballing rhythmical impetus, ultimately rising to a feverish intensity recognisable to anyone who has caught the Pakistani midday sun.

Parts are avilable direct from the composer.

This is also available in a new arrangement for clarinet, piano, violin and cello, available from SibeliusMusic.