By: Sydney Baynes
For: Concert band / wind band
This music is in your basket
View basket
Loading... 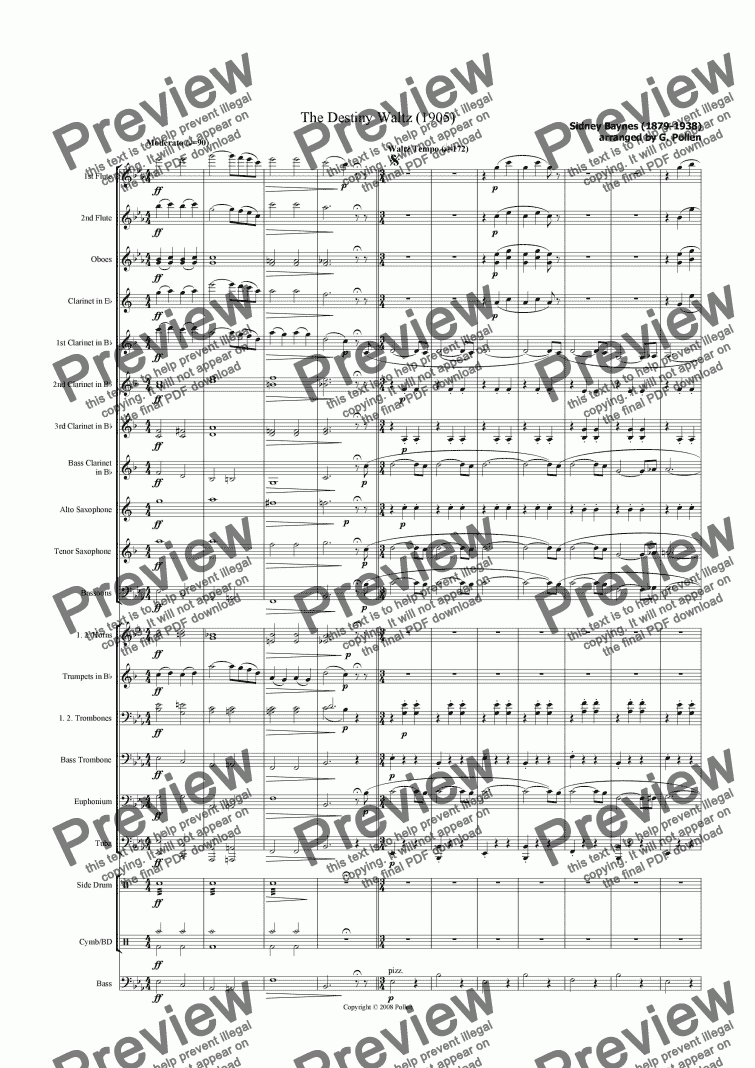 Composer
Sydney Baynes
Year of composition
1905
Arranger
George Pollen
Lyricist
none
Difficulty
Moderate (Grades 4-6)
Duration
6 minutes
Genre
Classical music
License details
For anything not permitted by the above licence then you should contact the publisher first to obtain permission.

Sidney Baynes (1879-1938) is another who was known primarily for one work, the Destiny Waltz, - composed in 1905 - one of many waltzes he wrote with titles ending in ’y’: Ecstasy, Entreaty, Flattery, Frivolry, Harmony, Loyalty, Modesty, Memory, Mystery, Phantasy, Victory and Witchery. He did of course write other things besides waltzes. He worked for the BBC for many years and his march Off We Go was the Radio Variety march. Other compositions included a Miniature Ballet Suite, the overture Endure to Conquer, first played at an Armistice Thanksgiving in Westminster Abbey, the genre piece The Spider Tread and another march, Here Goes! His songs include several arrangements (by others) of the ever-present Destiny; of the rest First Love and the Garden of My Love were adapted as cornet (or clarinet) solos. He also wrote much for piano solo and some church music. Baynes was even more valuable, to the BBC and to light music generally, for his arrangements than his compositions. These were countless, including Fifty Years of Song, The Gay Nineties, Tipperaryland and other Irish selections, Leslie Stuart’s Songs, Molloy’s Songs, Sanderson’s Songs (two selections), W.H. Squire’s Songs, the dances from Sheridan’s ’opera’ The Duenna, in Alfred Reynolds’ adaptation, and so on. His fondness for saxophones emerges in his compositions and arrangements. Born in 1879, he was Organist at various London churches, then accompanist to singers like Edward Lloyd and Ben Davies. He subsequently conducted in several London theatres including Drury Lane and the Adelphi. He formed and conducted his own orchestra between 1928 and 1938 which broadcast and recorded regularly. He died on 3 March 1938 at Willesden.

Sorry, there's no reviews of this score yet. Please .
In order to submit this score to ScoreExchange.com George Pollen has declared that they own the copyright to this work in its entirety or that they have been granted permission from the copyright holder to use their work. If you believe that this score should be not available here because it infringes your or someone elses copyright, please report this score using the copyright abuse form.