By: Peter Cernuska
For: Orchestra
This music is in your basket
View basket
Loading... 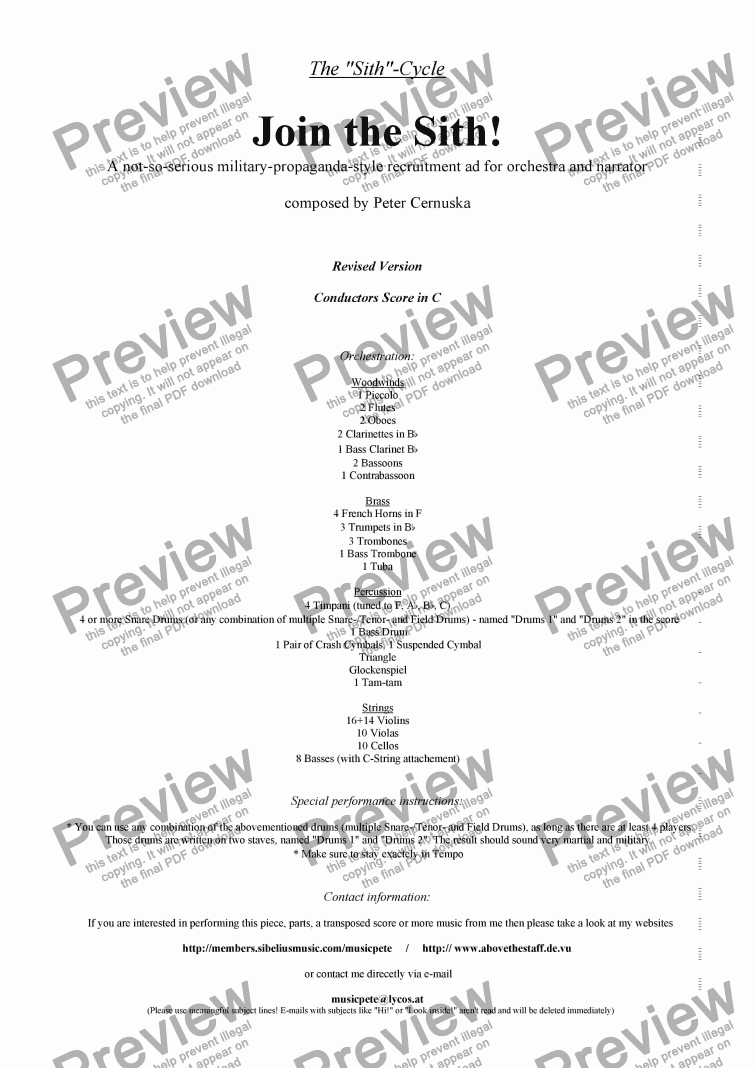 By: Peter Cernuska
For: Orchestra

Composer
Peter Cernuska
Year of composition
2001
Lyricist
Peter Cernuska
Difficulty
Difficult (Grades 7+)
Duration
1 minute
Genre
Other
License details
For anything not permitted by the above licence then you should contact the publisher first to obtain permission.

This little piece of music is intended as a parody of military recruitment ads. As such it lasts exactely one minute (just like a tv-spot) and needs one narrator to speak the text. The idea behind it: What would happen, if the Sith (the really bad guys in the Star Wars universe) would recruit people for their wars? They certainly would think that THEY are the good guys…

Technical notes: I wrote my "March of the Sith" first to get an "evil" melody, then took that melody and turned it into a "we are the good guys"-theme. The pace is very fast and there is a constant switching between scales and rythms to underscore the text (and imaginary pictures). I had much fun composing this not-so-serious piece of music and I hope you'll have fun with it, too!

Here ist the narrator text for those who want to read along:

(With a dark voice; Lurid:)

Our constantly growing armada is always in need of skilled folks… LIKE YOU!

Join us, 'cause only we can offer you THIS level of military education! (slight pause)

Plus, WE fight for a cause: We want to wipe that jedi scum out of this galaxy!

Join our infantry and help us invade planets infested by jedi. Join our flying corps and lear how to bomb their planets, shoot their fighters, and generally…. (low voice) wipe them out! (regular voice:) If you're skilled enough, you can rise through the ranks and even end up with an own star destroyer under YOUR command!

So join us! There are still many fights to fight but in the end, victory will be ours!

Update: I'm so happy about the 130 hits I got in the last year! So I updated the score, made a ton of corrections and even uploaded a new mp3 with really good samples. I'd love to hear what you think about it.

Reviews of Join the Sith!

Sorry, there's no reviews of this score yet. Please .
In order to submit this score to ScoreExchange.com Peter Cernuska has declared that they own the copyright to this work in its entirety or that they have been granted permission from the copyright holder to use their work. If you believe that this score should be not available here because it infringes your or someone elses copyright, please report this score using the copyright abuse form.