By: Cody Wright
For: Solo instrument (Piano)
This music is in your basket
View basket
Loading... 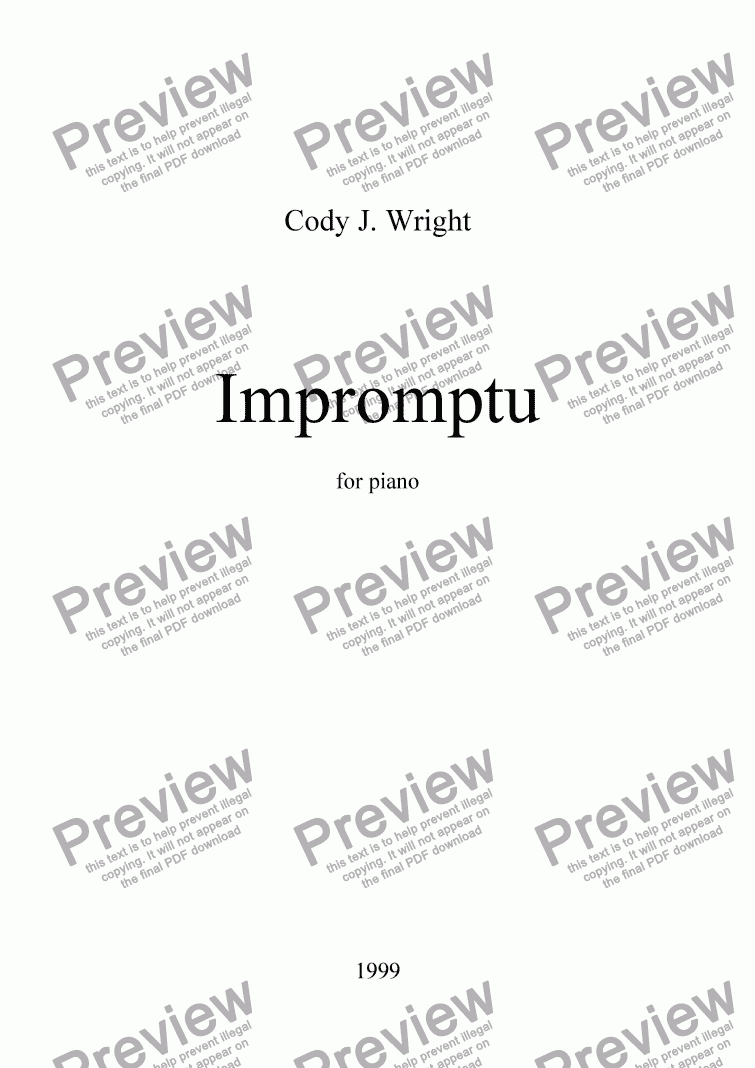 Composer
Cody Wright
Year of composition
1999
Difficulty
Difficult (Grades 7+)
Duration
9 minutes
Genre
Modern classical music
License details
For anything not permitted by the above licence then you should contact the publisher first to obtain permission.

Impromptu was first performed by Sergey Schepkin in Williams Hall at New England Conservatory of Music in Boston on March 28, 2000. The score is dedicated to my grandfather, John Kitzmiller.

The dedication on the drafts to this score reads �for myself�. I didn�t conceive this dedication out of a sudden burst of narcissism, but rather in relation to my own inability to play the piano. I often regret not having learned the piano, and feel that if I could change one thing about my life I would be a pianist. This feeling has prompted me to write several works for piano in the hopes of establishing greater fluency with the instrument. The piece is an exploration of the E-Type hexachord and the variety of sonorities contained therein. I did not set out with any solid preconceived structure for the piece, but decided to let it unfold according to where the music took me. Everything in the piece is derived from the hexachord, except for certain areas that focus on what is missing from the hexachord, namely tritones and major seconds. The form gradually took on a symmetrical shape (ABCBA), but revision altered it to ABCAB, which I felt worked much better. To me, the word �impromptu� suggests a somewhat unorganized, spontaneous pontification on a certain subject. My mentor, Alan Fletcher, described it as �Here. Here�s a hexachord. Now just run with it for five minutes.� At the same time that I conceived this work, I was, like most composers who write pieces where the pianist spends a lot of time banging out dark, violent chords on the piano, going through difficult times. Shortly after losing a loved aunt to cancer, I found out that my grandfather, the main inspiration for me in life, had begun a battle against the same terrible disease, and it was not much longer until he lost. This piece is an emotional wandering, juxtaposing anger with love, tenderness with sorrow. Five minutes, if you will, for my grandfather.

October: for piano, ...when softly she sleeps: for flute and piano, Variance: for piano and Inori (Prayer): for piano, 3 hands

Reviews of Impromptu: for piano

Sorry, there's no reviews of this score yet. Please .
In order to submit this score to ScoreExchange.com Cody Wright has declared that they own the copyright to this work in its entirety or that they have been granted permission from the copyright holder to use their work. If you believe that this score should be not available here because it infringes your or someone elses copyright, please report this score using the copyright abuse form.