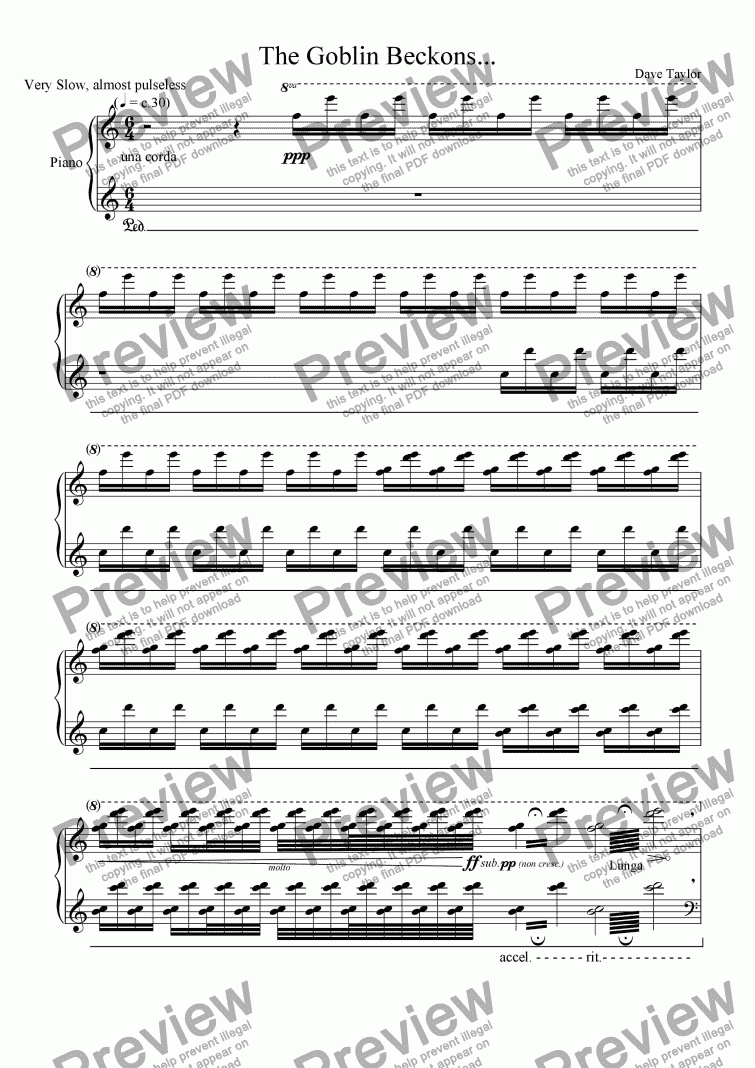 For solo piano; a deeply programmatic piece, modelled after an extended waking dream I had one night, on the train from Paris to Amsterdam, which owed a great deal to both J.R.R. Tolkien and Jules Verne.

The opening (which should rise from nothing) depicts a state of idle drowsiness, into which a gradual sense of wrongness is intruded. The eponymous Goblin, as the source of this, is represented by the bass motif at the top of page 2. He motions after him, travelling from a light state to a darker one, possibly inside a cave of some sort. Blinded, the protagonist stumbles into a deep hole, falling to another level (the cadenza on page 3). At the bottom, there is an intersection of tunnels (Jules Verne's 'Journey to the Centre of the Earth' being an obvious influence here), out of one of which the Goblin is again motioning. Following him, the pace increases (Running motif - as at the Piu Animato in the left hand, page 3). Eventually, this leads to sounds of… what exactly? It is hard to say at this point, but, on rounding the last corner, a huge underground chamber filled with Goblins is entered (Sub. Allarg., page 5).

Too late to escape, it is caught up in a movement of the masses, which soon becomes a grotesque procession (Meno Mosso, bottom of page 6) towards an elevated figure, which is identified as the Goblin King (and here a reference to 'The Hobbit' is clear). Escape seems impossible, but the Goblins march on, impervious, until, at the moment when the subject is about to reach the throne, they are spotted by the King. He stands, bellowing his rage, and at last the dream finds the (original) Goblin; standing and beckoning in the entrance of a small tunnel close by. Pursued by many, the dream runs for the tunnel (as at the Molto Agitato, bottom of page 8), eventually losing them by the Molto Meno Mosso, page 10, where their far-off anger and frustration is heard.

The Goblin has now disappeared, and the dream follows the tunnel further along, where it leads to weird sounds of wildlife (not to Gollum!). Continuing more cautiously, it leads out from a rock face into an eldritch jungle, populated by strange swaying plants and trees (Largo Misterioso, page 11). Further into this, there is a great sea.

The gentle lapping of its waves is heard in the left hand at the Molto Largissimo (page 11), along with the strange animal cries. Gradually a similar wrongness intrudes upon this rhythm (from un molto poco stringendo, page 13), rising to a climax in the bar before the Trionfale (page 14), when, upon turning around, the Goblin City is revealed in it's splendour upon the cliffs from which the dream emerged. It's alien towers and mighty architecture are depicted in the Trionfale section.

At length the focus directs upon the tallest tower, following it upward until there is nothing but a black sky overhead, and the lapping of the waves is again audible (Molto Allarg., page 17). The ending is the rise back into consciousness.

In order to submit this score to ScoreExchange.com Dave Taylor has declared that they own the copyright to this work in its entirety or that they have been granted permission from the copyright holder to use their work. If you believe that this score should be not available here because it infringes your or someone elses copyright, please report this score using the copyright abuse form.