By: Dave Taylor
For: Large mixed ensemble
This music is in your basket
View basket
Loading... 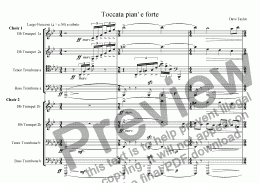 Composer
Dave Taylor
Year of composition
1996
Lyricist
none
Difficulty
Difficult (Grades 7+)
Duration
18 minutes
Genre
Modern classical music
License details
For anything not permitted by the above licence then you should contact the publisher first to obtain permission.

For a brass octet of four trumpets, two tenor trombones, and two bass trombones, arranged in two equal antiphonal choirs; the inspiration for this piece came from a playing workshop I attended in Oxford in the mid 90s on the music of Giovanni Gabrieli (c.1555-1612). His books of 'Sacrae Symphoniae' (published 1597 and 1615, posthumously) contain some of the earliest known music specifically for brass, albeit with the top parts covered by cornetti, which were popular at the time. Of course, the piston valve had not then been invented, so the trumpet was extremely limited in its melodic vocabulary, but I have written for trumpets rather than cornetti as the modern trumpet is a) more chromatically versatile, b) better able to blend with the modern trombone, c) capable of greater dynamic contrast, and d) more widely available.

The title pays homage to Gabrieli's "Sonata Pian' e Forte", one of the first pieces to use written dynamics, and indeed dynamic contrasts create some of the most dramatic moments of the piece - on both small and large scales, but the essence of the piece is its large scale structure - in three main sections, as (loosely) Toccata, Chorale and Fugue (J.S. Bach is also a particular favourite of mine), three main motifs interweave, varying in importance according to the section. The first motif is the sequence of chords in the trumpets at the opening. The second is first revealed in full in the Molto Vivace at bar 46 in the choir 1 trombones, while the third, although hinted at extensively, doesn't make an appearance in full until bar 284, the first of several apparent starts of the fugal section, which finally gets properly underway at bar 314. As the piece progresses, the music becomes ever more tightly wound around these last two themes, which form the cruxes of, respectively, the second and third movements after the rather freer Toccata-like opening, which uses several less related motifs, some of which nevertheless hint at the more important units. The two main themes do not occur simultaneously in the originally intended counterpoint until the 'Con Violenza' at bar 379, sparking the climax of the piece.

The players should be arranged in two opposing rows, angled so that both sides are pointing more or less towards the audience in front on the opposite side, with 1st trumpets on the ends nearest the audience down to the bass trombones furthest from them (and closest to each other). There should be a gap of maybe five feet between the two bass trombonists, increasing up the line. For preference, all players should stand throughout. I would recommend using a conductor.

Alternative instruments, such as trumpets in higher keys, or alto or contrabass trombones are perfectly permissible. It is probably preferable to play some of the lowest notes in the bass trombones up an octave than to play them on tuba.

This work had a long genesis. I have given the date of composition as 1996, when most of it was written, during my first year of 'A'-level study at the age of 16, but it was not completed until approximately 2005 (when I picked it up from where I had stalled 9 years previously at bar 350). This piece represented a conscious effort to move away from the pastiche style that I had written in in previous works, and, while clearly transitionary, and also rather impractical, on account of its extreme difficulty, it remains something of a landmark in my personal stylistic development.

Sorry, there's no reviews of this score yet. Please .
In order to submit this score to ScoreExchange.com Dave Taylor has declared that they own the copyright to this work in its entirety or that they have been granted permission from the copyright holder to use their work. If you believe that this score should be not available here because it infringes your or someone elses copyright, please report this score using the copyright abuse form.