By: John Pitts
For: Orchestra
This music is in your basket
View basket
Loading... 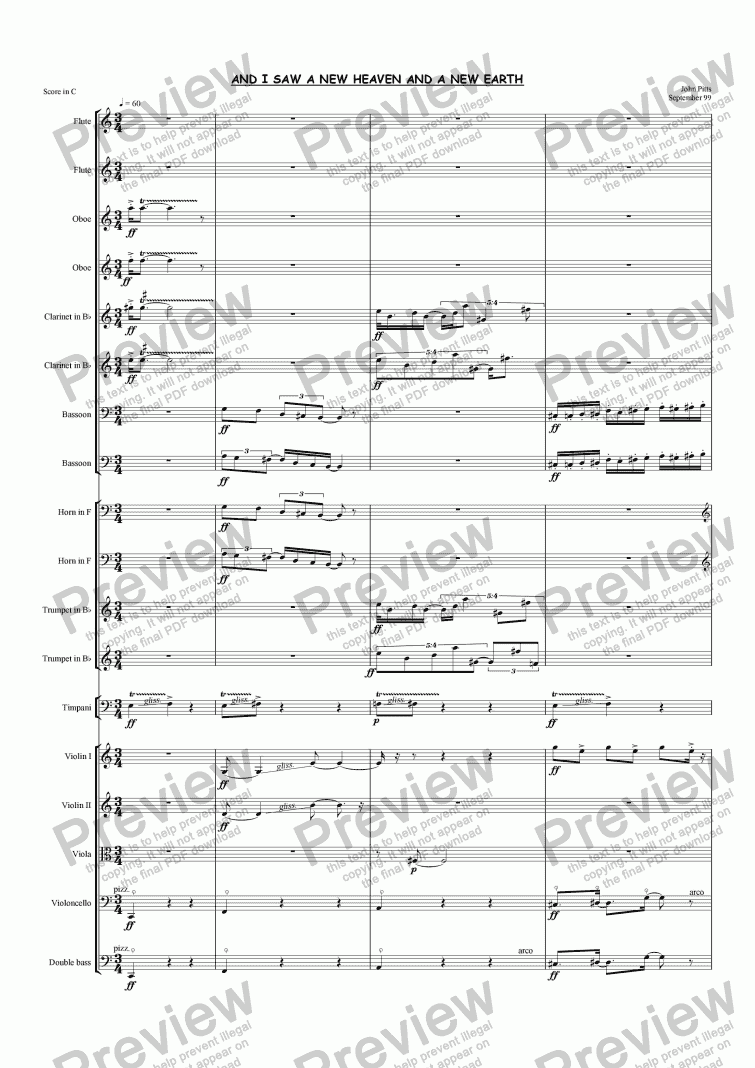 By: John Pitts
For: Orchestra

Composer
John Pitts
Year of composition
1999
Lyricist
none
Difficulty
Difficult (Grades 7+)
Duration
10 minutes
Genre
Modern classical music
License details
For anything not permitted by the above licence then you should contact the publisher first to obtain permission.

Then I saw a new heaven and a new earth, for the first heaven and the first earth had passed away, and there was no longer any sea. I saw the Holy City, the New Jerusalem, coming down out of heaven from God, prepared as a bride beautifully dressed for her husband. And I heard a loud voice from the throne saying, ?Now the dwelling of God is with men, and He will live with them. They will be His people and God Himself will be with them and be their God. He will wipe every tear from their eyes. There will be no more death or mourning or crying or pain, for the old order of things has passed away.?

He who was seated on the throne said, ?I am making everything new!? Then He said, ?Write this down, for these words are trustworthy and true.?

The title AND I SAW A NEW HEAVEN AND A NEW EARTH is from the opening verse of Revelation, chapter 21. It is part of a prophetic description of the final destiny of the world, and the conclusion of God?s purpose in its creation. The form of this orchestral work, and the dramatic thread through it, follow the Biblical account of pre-Christian history, the various stages in the growth of the Church, and the prophetic visions of the hereafter. More specifically it follows God?s dealings with His people, and their faith in or rejection of His ordinances. After the creation narrative there are three periods of roughly two thousand years ? the 10 patriarchs (from Adam to Noah), the birth of the Jewish nation (Abraham (c.2000 BC) to Christ), and the last two thousand years of Church history ? a main feature of each being conscience, law and faith. These periods (3 x 2 x one thousand years) also correspond in various ways to the first six days of the creation narrative. Revelation also describes a further period of one thousand years during which Christ will reign personally on earth, which corresponds to the seventh or the Sabbath day of creation. It is after this period that the world is ultimately perfected, and the eighth day and the new week begin.

I have used the idea of a sevenfold era, and the purpose, direction, and ultimate perfect destiny through it, as the structural basis for this piece. The idea of the ever increasing clarity of and disparity between a godly perfection, and evil, was a useful stimulus and aid in the unraveling of my main thematic material to its culmination in the finally harmonically and rhythmically stable hymn of section G (the ?Sabbath? millenium). Although various chronological events, symbolism, and the prevailing spiritual states (at any one time) are all used as starting points for musical inspiration, this piece is not supposed to represent a detailed historical account, and can in only the tiniest measure reflect or shadow the greater spiritual reality. My intention was to compose a dramatic work that has for its structural basis something absolutely solid, something with clear purpose and direction. My hope is that in some small way I have been able to reflect it.