By: Raymond Beaver
For: Orchestra
This music is in your basket
View basket
Loading... 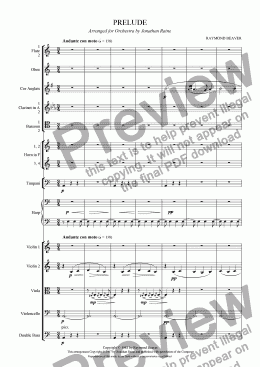 By: Raymond Beaver
For: Orchestra

Composer
Raymond Beaver
Year of composition
1981
Arranger
Jonathan Raine
Difficulty
Moderate (Grades 4-6)
Duration
4 minutes
Genre
Modern classical music
License details
For anything not permitted by the above licence then you should contact the publisher first to obtain permission.

In late 2007, I came across a short guitar tune on an internet music forum simply entitled "Prelude", written by an elderly gentleman called Raymond Beaver from Northern England:

"In 1981, when the last of my children had departed for the drug paradise of Amsterdam, I faced a solitary immediate future. Although I'm not a lonely sort of person, my mood was a little bit sad, and musical stuff started to go around in my head to reflect that. I hadn't written anything since I left the music business in 1975, but this seemed to be a time to write something."

The haunting melody - one of those tunes which was so simple yet so effective - became firmly lodged in my head for days. Very quickly, I felt compelled to put down on paper the orchestral arrangement you can see here.

I contacted Raymond by email in early 2008 to show him the result. Unknown to me, his doctor had just given him only weeks to live, and it was obvious that my gesture had had a profound effect. His surprise and gratitude at such a difficult time had moved him more than I could have imagined.

Sadly, Raymond passed away shortly after. From our correspondence, I know that it would have given him great joy to see his music reach a wider audience or even perhaps be performed. By publishing this arrangement here, I hope that - in his memory - Raymond's goal can be achieved.

"Prelude" is Copyright © 1981 by Raymond Beaver and is published here with permission of the Composer, obtained before his death.

Sorry, there's no reviews of this score yet. Please .
In order to submit this score to ScoreExchange.com Jonathan Raine has declared that they own the copyright to this work in its entirety or that they have been granted permission from the copyright holder to use their work. If you believe that this score should be not available here because it infringes your or someone elses copyright, please report this score using the copyright abuse form.