By: Johann Pachelbel
For: String quartet
This music is in your basket
View basket
Loading... 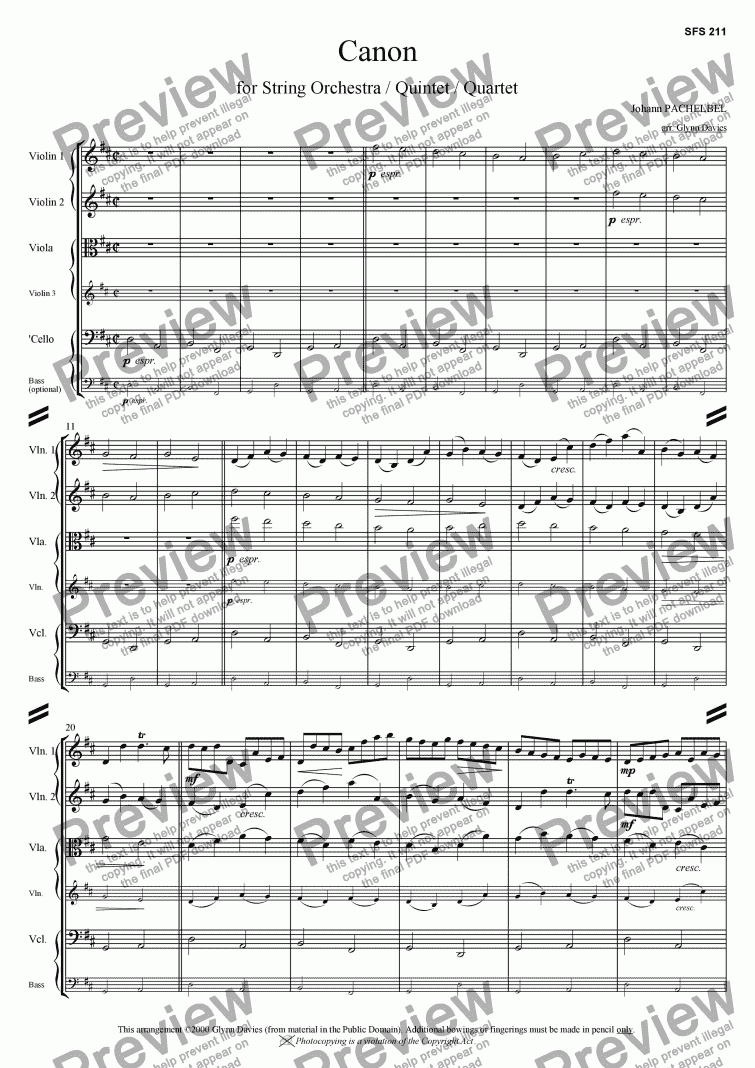 By: Johann Pachelbel
For: String quartet

Composer
Johann Pachelbel
Year of composition
1695
Arranger
Glynn Davies
Difficulty
Moderate (Grades 4-6)
Duration
5 minutes
Genre
Classical music
License details
For anything not permitted by the above licence then you should contact the publisher first to obtain permission.

Johann Pachelbel was a well-known musician in his day. He composed a multitude of works for the organ (his native instrument), along with motets, sacred concertos, keyboard suites, and pieces in a variety of other genres. Of all these hundreds of compositions, however, far and away his best-known work is the Canon in D major, known colloquially as Pachelbel's Canon. This short piece has become a mainstay of chamber orchestras and other musicians and ensembles throughout the world. It has been arranged for almost any instrument or combination of instruments one might imagine, from synthesizer to brass quintet, and has been adapted for musical styles from jazz to new age.

A canon is simply an imitative piece in which one instrument plays a melody, and part way into it another instrument joins in with the same tune, followed by one or more further instruments. In the case of Pachelbel's work, a two bar ostinato (or repeating melodic phrase) in the bass becomes the foundation for a set of 28 variations, in which three violins interact in canon with one another. Baroque convention would have this work performed in a moderate-to-fast tempo; however, the work is most often heard played slowly. Played thus, the Canon becomes a quite beautiful and meditative work. Only occasionally is the Canon played in tandem with the lively Gigue that Pachelbel intended to follow it.

I have taken this piece and re-arranged it in simple duple time, which has the result of doubling the lengths of the notes. This means that the 32nd notes become 16th notes and so on, and the music is therefore a lot easier to read. The third violin part has been re-written as a viola part, but some of the top notes have been lowered an octave to better suit the range of the instrument.

This arrangement also comes with an optional double bass part for use with string orchestra.

Reviews of Canon in D