By: Jonathan Scott
For: Quintet of Descant Recorders
This music is in your basket
View basket
Loading... 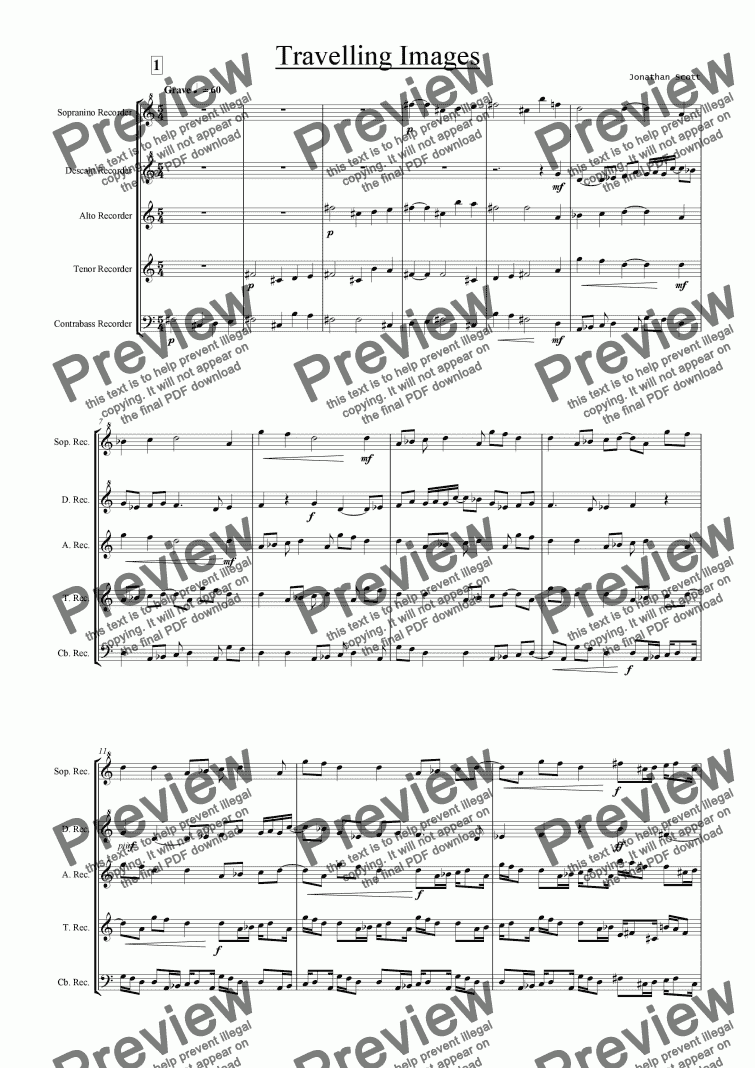 By: Jonathan Scott
For: Quintet of Descant Recorders

Composer
Jonathan Scott
Year of composition
2009
Difficulty
Difficult (Grades 7+)
Duration
6 minutes
Genre
Classical music
License details
For anything not permitted by the above licence then you should contact the publisher first to obtain permission.

This piece is a combination of small sketches that have been conceived whilst I have been travelling to and from London during my first two terms at Trinity. Some are based upon short motifs, whilst others are clearly defined melodies.

The tonal and somewhat clich� aspects of the music reflect upon the way music is used as a diversion from the reality of travelling, and how I often find myself thinking of tunes to entertain and pass time in situations such travelling home or to rehearsals. Some have been completed during the journey, whilst others began as little more than a bar or two jotted down on a spare scrap of paper.

1. December Morning I wrote this short, nine note motif while travelling to Salisbury on the 1st of December. It was perhaps the most depressing and anxious part of my time at Trinity, I had emptied my bank account to buy my outward ticket and my return to London depended upon a successful day’s busking in the freezing cold. I left at 5am from halls, on a cold and frosty morning. The journey from waterloo was the most surreal experience, a combination of clear blue skies, a landscape of white frosty hills and the warmth of the deserted train, as I sat isolated from it all inside my many layers of warm clothing.

2. Snow Lines and Snow Roads The haunting melody to this section occurred to me whilst leaning out the window of an intercity train on the way back to London. The train had just reached the outskirts of London, and the sensation was a blur of passing lights, tracks, rushing snow and an exhilarating chill. The ever-increasing intensity of the accompaniment was inspired by my journey from Paddington back to halls, where I ran through the centre of London transferring between busses, before managing to climb aboard what must have been the last bus to go to Greenwich the driver told us "I’ve been told to clear the bus and return to the depot, but I will continue on to Greenwich" a ride that turned out to be exciting in itself as the double-decker bus swerved, skidded and slid on the increasingly snow-covered road.

3. Summerdown Hills The two chords and the simple arpeggio figures which form this section were written down during the final few minutes of my first journey home during first term at Trinity. I had been living in the city for over and month and the first sight of home a rural Wiltshire village on the edge of the Summerdown hills on this clear sunny morning gave me a sensation of admiration and longing for the place I lived for over 15 years.

4. Paddington rush hour, back and forth at Reading The most frustrating and pressured commute back home, spent battling cancelled busses, tube delays, Friday afternoon rush hour at Paddington, and a train that for some inexplicable reason had to turn around twice at Reading.

5. Clacton-on-Sea doubts and daydreams This was inspired by another early journey from halls, this time to a rehearsal: However, that morning I felt completely out of my depth: I was going to rehearse with a championship section brass band (my previous experience had only involved fourth section bands) in preparation for a contest I would be playing with them the following weekend. However, what was worrying me most was that I had been asked to play soprano cornet, the highest and most exposed part in a brass band, in one of the most difficult pieces I had ever seen. The ride down was long and tiring, and I was suffering from a hectic weekend spent hosting my best friend which had inevitably involved drinking the night before. This however gave me plenty of time to think, which resulted in the basic material for this section.

6. Race to Waterloo Woken up by my alarm after pressing "snooze" for two hours I realised I only had 50 minutes to pack and get to Waterloo. An eventful journey followed, comprising of a badly judged bus change and severe tube delays. This lead to a mad dash through Southwark station, along the length of the Waterloo East platform and through the crowded concourse of Waterloo station before squeezing through the closing doors of the train.

In The Mode Movement Two for Clarinet and Violin, Trumpet Voluntary (Prince of Denmark’s March), Morning Flight, Lyricise, Trumpet Solo With Strings and Piano accompaniment. and String Quartet No.2 (A Wiltshire Suite)

Sorry, there's no reviews of this score yet. Please .
In order to submit this score to ScoreExchange.com Jonathan Scott has declared that they own the copyright to this work in its entirety or that they have been granted permission from the copyright holder to use their work. If you believe that this score should be not available here because it infringes your or someone elses copyright, please report this score using the copyright abuse form.