By: Unknown
For: Brass quintet
This music is in your basket
View basket
Loading... 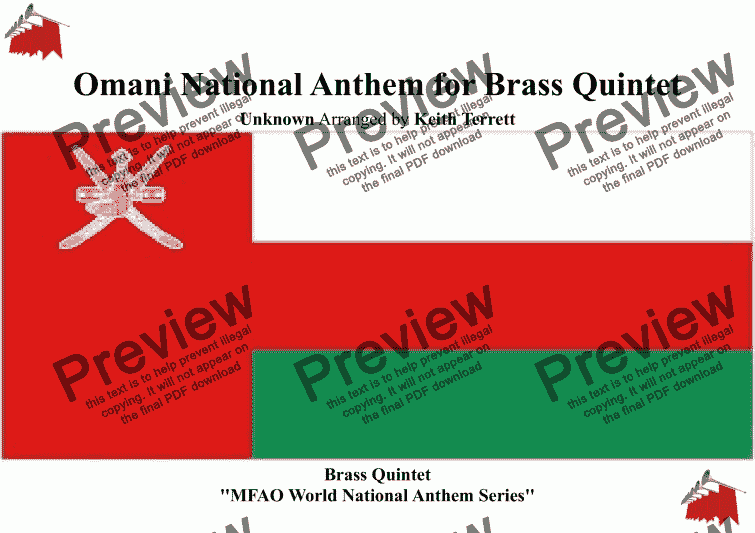 By: Unknown
For: Brass quintet

Composer
Unknown
Arranger
Keith Terrett
Publisher
Music for all Occasions
Difficulty
Moderate (Grades 4-6)
Duration
1 minute
Genre
Classical music
License details
For anything not permitted by the above licence then you should contact the publisher first to obtain permission.

as-Salām as-Sultānī (Arabic: نشيد السلام السلطاني‎, meaning "Peace to the Sultan") is the Sultanate of Oman’s national anthem. It was adopted in 1970 and amended on November 6, 1996.

The music, in the “Arab fanfare” style of anthem is taken from a salute to the Sultan by a British ship in 1932. The bandmaster of the HMS Hawkins, while visiting Muscat, was asked to write a salutation for the Sultan on the occasion of his visiting the Hawkins. The tune was composed and first performed on the occasion of the visit, December 10, 1932. Originally, there were different words to the anthem. When the current sultan, Qaboos bin Said Al Said, took power in 1970 and changed the name of the country to Oman (from Muscat and Oman), new words were written. A slight change to the harmonization was made on November 6, 1996.

Oman, officially the Sultanate of Oman is an Arab country in southwest Asia on the southeast coast of the Arabian Peninsula. It borders the United Arab Emirates on the northwest, Saudi Arabia on the west and Yemen on the southwest. The coast is formed by the Arabian Sea on the south and east and the Gulf of Oman on the northeast. The country also contains Madha, an exclave enclosed by the United Arab Emirates, and Musandam, an exclave also separated by Emirati territory.