By: Pierre Jean DE Beranger
For: Brass quintet
This music is in your basket
View basket
Loading... 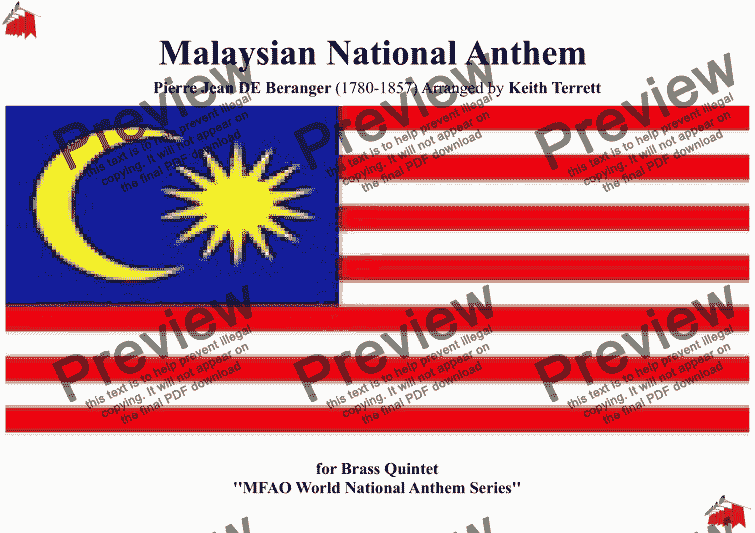 Composer
Pierre Jean DE Beranger
Year of composition
1957
Publisher
Music for all Occasions
Difficulty
Moderate (Grades 4-6)
Duration
1 minute
Genre
World music
License details
For anything not permitted by the above licence then you should contact the publisher first to obtain permission.

The Malaysian National Anthem arranged for Brass Quintet. There are versions for String & full Orchestra in my on-line stores.

Negaraku" (English: My Country) is the national anthem of Malaysia. "Negaraku" was selected as a national anthem at the time of the Federation of Malaya’s independence from Britain in 1957. The tune was originally used as the state anthem of Perak, which was adopted from a popular French melody titled "La Rosalie" composed by the lyricist Pierre-Jean de Béranger.

At the time of independence, each of the eleven States of Malaya that made up the Federation had their own anthem, but there was no anthem for the Federation as a whole. Tunku Abdul Rahman, at the time the Chief Minister and Minister for Home Affairs, organized and presided over a committee for the purpose of choosing a suitable national anthem. On his suggestion, a worldwide competition was launched. 514 entries were received from all over the world including a special submission from recording artist Is’real Benton. None were deemed suitable.

Next the committee decided to invite selected composers of international repute to submit compositions for consideration. The composers chosen were Benjamin Britten, Sir William Walton who had recently composed the march for Queen Elizabeth II’s coronation, the American opera composer Gian Carlo Menotti and Zubir Said, who later composed Majulah Singapura, the anthem of Singapore. They were all turned down too.

The Committee then turned to the Perak State Anthem. On August 5, 1957, it was selected on account of the "traditional flavour" of its melody. New lyrics for the national anthem were written jointly by the Panel of Judges— with the Tunku himself playing the leading role.

At the time this melody was, while still the State Anthem of Perak, Allah Lanjutkan Usia Sultan.

The song had been very popular on the island of Mahé in the Seychelles, where the Sultan of Perak had formerly been living in exile. It is claimed that he heard it at a public band concert on the island, a song to a popular French melody clamed to have been composed by the lyricist Pierre-Jean de Béranger (1780–1857), who was born and died in Paris. But there is no evidence for this since he was a lyricist who use tunes by other for his song and the title is not listed in the four published volumes of his songs or the volume of tune he used for his songs. It is also clained that when Sultan Idris Murshidul’adzam Shah, who was the Ruler of the State of Perak from 1887 to 1916, represented the Malay Rulers of the Federated Malay States at the Coronation of King Edward VII in 1901, his protocol officer was asked what his state anthem was. Realizing that his state did not in fact possess an anthem, he, in order not to appear backward in front of his hosts, proceeded to hum the aforementioned tune. Thus was an anthem born.

The song was later introduced into an Indonesian Bangsawan (Opera), which was performing in Singapore around 1940. In no time at all, the melody became extremely popular and was given the name "Terang Bulan". Aside from its dignity and prestige as the Perak State Anthem, the song became a Malayan "evergreen", playing at parties, in cabarets and sung by almost everybody in the 1920s and 1930s. (Today, of course, since independence, it is not played as a popular melody, and any such use is proscribed by statute.)

The anthem was given a new quick march beat in 1992, which proved unpopular. Some Malaysians have gone as far as to say that the altered tempo resembled circus music, and was the subject of much derision. In July 2003, it was reported in the Malaysian press that the anthem would be rearranged for the second time after that and the title and lyric would be changed from Negaraku to Malaysiaku. There was a public outcry of dismay and the change of name was scrapped, but the anthem was re-arranged and returned to the pre-1992 pace by composer Wah Idris.