By: W A Mozart
For: Duet of Pianos
This music is in your basket
View basket
Loading... 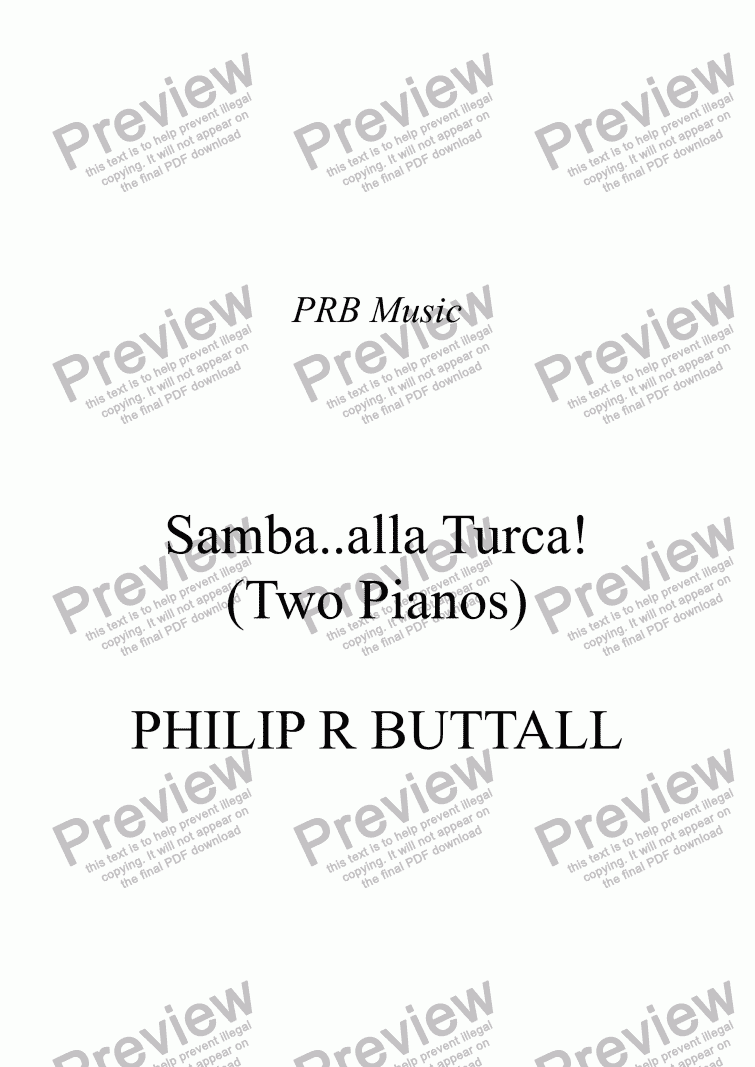 By: W A Mozart
For: Duet of Pianos

Composer
W A Mozart
Year of composition
2002
Arranger
Philip R Buttall
Publisher
PRB Music
Difficulty
Difficult (Grades 7+)
Duration
4 minutes
Genre
Classical music
License details
For anything not permitted by the above licence then you should contact the publisher first to obtain permission.

Grieg made an arrangement of Mozart’s Sonata in C, K545, by adding a separate piano part to Mozart’s original, thereby presenting the classical score in a more romantic setting. Most pianists will play Mozart’s Ronda alla Turca from his Sonata in A major, so I thought I’d add a little bit of latin temperament to it. I have kept Mozart’s original on Piano I, just tweaking the odd dynamic on occasions, whilst giving Piano II an independent Samba to play! Hopefully they both fit together! There is also an extra Mozart quote at the close which, together with a bit of Brazilian colour, rounds the work off on a high note!

It’s interesting to read that the odd reviewer seems to take it seriously, or considers that it’s intended as a personal afront to the original composer. It’s just a fun piece, which you’re free to take or leave! The original is always out there!

The Wind Band version, which is very similar to the original, with a little tweaking of the repeats, as well as adding a little extra counter-melody along the way, is now published by EDITIONS MARC REIFT of Switzerland, and has just been released on a CD

The attached MP3 file features an original two-piano recording by Maja and Goran Brkovi. The performance is simply stunning, and Sibelius couldn’t have done it more accurately! Do see my feature on Maja and Goran at PRB Music.

STOP PRESS: Since the original score and version for piano duet, there have been a number of small changes as various versions for different ensembles have appeared since 2002.

I have therefore incorporated all of these into an amended version of what was the original setting, and this score (2010) is now the version shown. Piano 1 is still essentially what Mozart wrote in his original, although a couple of extra repeats have now been removed, and all counter-melodies are now in place.