By: Stanko Premrl
For: Brass quintet
This music is in your basket
View basket
Loading... 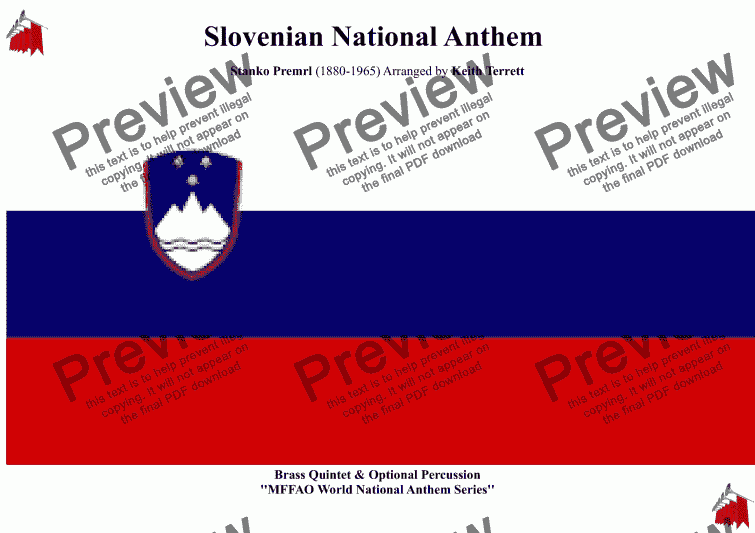 By: Stanko Premrl
For: Brass quintet

Composer
Stanko Premrl
Arranger
Keith Terrett
Publisher
Music for all Occasions
Difficulty
Moderate (Grades 4-6)
Duration
1 minute
Genre
World music
License details
For anything not permitted by the above licence then you should contact the publisher first to obtain permission.

The National Anthem of Slovenia arranged for Brass Quintet.

Zdravljica (A Toast) or Zdravica, written in 1844, is the best-known poem of the Slovenian national poet France Prešeren. Since 27 September 1989, its 7th stanza has been the national anthem of Slovenia.

Jernej Letnar Černič, a law expert and university lecturer, wrote in September 2010 that the act contradicted the constitution and therefore the entire Zdravljica should be considered the anthem. Slovene writer Boris Pahor suggested that using a combination of verses of the seventh and the second stanza as the national anthem, as the second stanza mentions Slovenes, whereas the seventh stanza doesn’t. This proposal was also supported by Janez Janša

Zdravljica is a drinking sng. In it, the poet declares his belief in a free-thinking Slovene and Slavic political awareness, promoting the idea of a unified Slovenia, which the March Revolution in 1848 elevated into a national political programme.