By: Enoch Songtonga
For: Quartet of Marimbas [treble staff]
This music is in your basket
View basket
Loading... 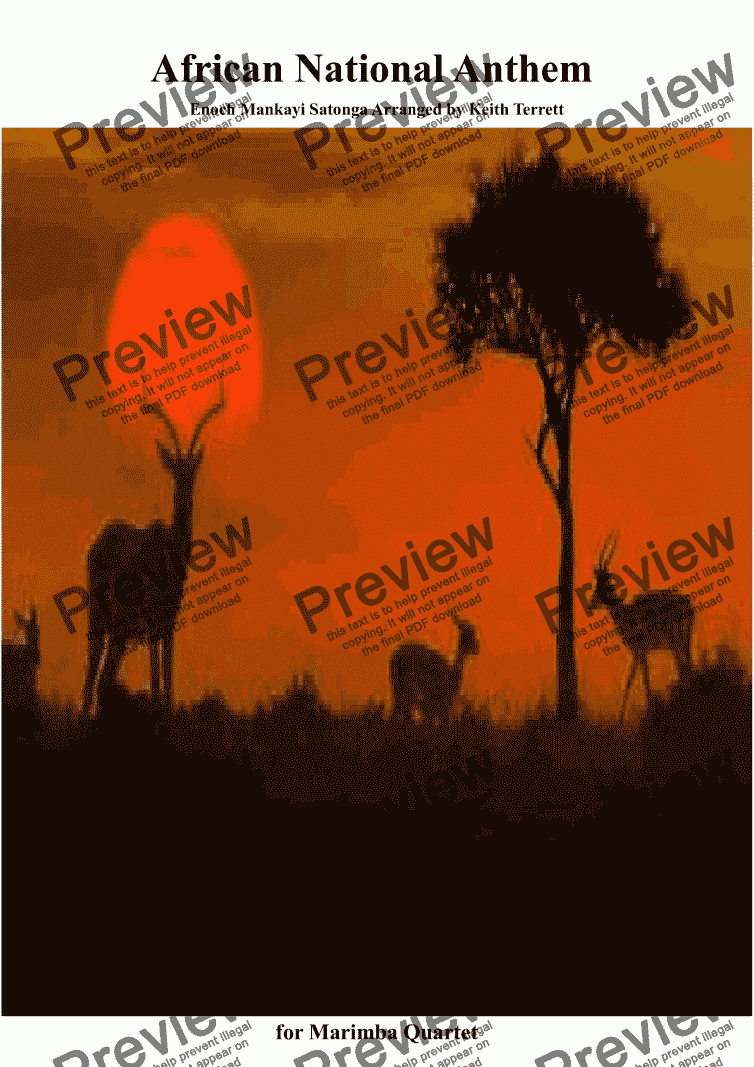 By: Enoch Songtonga
For: Quartet of Marimbas [treble staff]

Composer
Enoch Songtonga
Year of composition
1897
Arranger
Keith Terrett
Year of arrangement
2009
Publisher
Music for all Occasions
Difficulty
Easy (Grades 1-3)
Duration
1 minute
Genre
World music
License details
For anything not permitted by the above licence then you should contact the publisher first to obtain permission.

"Nkosi Sikelel' iAfrika" was originally composed as a hymn in 1897 by Enoch Sontonga, a teacher at a Methodist mission school near Johannesburg. He based the melody on the hymn tune "Aberystwyth" by Joseph Parry. The words of the first stanza and chorus were originally written in Xhosa as a hymn. In 1927 seven additional Xhosa stanzas were added by the poet Samuel Mqhayi. Sontonga originally composed the hymn in B-flat major with a four-part harmony supporting a repetitive melody characteristic of "both Western hymn composition and indigenous South African melodies." The hymn became popular in South African churches and was taken up by the choir of Ohlange High School, whose co-founder served as the first president of the South African Native National Congress. It was sung to close the Congress meeting in 1912, and by 1925 it had become the official closing anthem of the organisation, now known as the African National Congress. "Nkosi Sikelel' iAfrika" was first published in 1927. The song was the official anthem for the African National Congress during the apartheid era and was a symbol of the anti-apartheid movement.[6] For decades during the apartheid regime it was considered by many to be the unofficial national anthem of South Africa, representing the suffering of the oppressed masses. Because of its connection to the ANC, the song was banned by the regime during the apartheid era.

In 1996, a shortened, combined version of the two compositions was released as the new national anthem of South Africa under the constitution of South Africa and was adopted the following year. This version uses several of the official languages of South Africa. The first two lines of the first stanza are sung in Xhosa and the last two in Zulu. The second stanza is sung in Sesotho. The third stanza consists of a verbatim section of the former South African national anthem, "Die Stem van Suid-Afrika", and is sung in Afrikaans. The fourth and final stanza, sung in English, is a modified version of the closing lines of "Die Stem van Suid-Afrika.

In Finland the same melody is used as the children's psalm "Kuule, Isä taivaan, pyyntö tää" ("Hear, Heavenly Father"). The hymn has appeared in Virsikirja, the hymnbook of the Evangelical Lutheran Church of Finland, with lyrics by Jaakko Löytty. In my store you will lots of other arrangements for tuned percussion, such as my arrangement of Czardas & The Gypsy Xylophonist in New Orleans.

You can find more of my compositions and arrangements for tuned percussion with Hamar Publications in the USA, and Dutch Music Publishers in Holland.