By: Robert Sammut
For: Brass quintet
This music is in your basket
View basket
Loading... 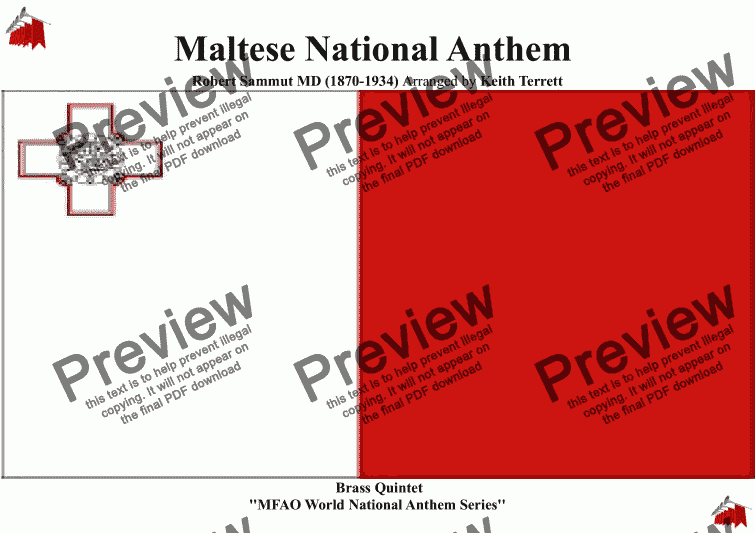 By: Robert Sammut
For: Brass quintet

Composer
Robert Sammut
Arranger
Keith Terrett
Publisher
Music for all Occasions
Difficulty
Moderate (Grades 4-6)
Duration
1 minute
Genre
Classical music
License details
For anything not permitted by the above licence then you should contact the publisher first to obtain permission.

If you need an anthem not in my store, let me know your requirements!

"L-Innu Malti" (in English: The Maltese Hymn) is the national anthem of Malta. It is written in the form of a prayer to God; It was composed by Robert Samut and the lyrics were written by Dun Karm Psaila.

From the mid nineteenth century up to the early 1930s, Malta was passing through a national awakening. With the increased national awareness, it was felt by many thinkers that Malta should have its own National Anthem. In 1850 Ġan Anton Vassallo composed Innu Lil Malta, which used to be played during many Maltese political manifestations and meetings. In 1922, Professor Mro. Robert Samut composed a short melody. A year later, Dr A.V. Laferla, Director of Primary Schools in Malta, obtained possession of this composition, as he wanted to have an anthem which could be sung by students in Malta’s schools. Laferla asked Dun Karm to write lyrics that would fit with Samut’s short and dignified melody. The poems of Dun Karm Psaila are well known for their religious and patriotic currents, and so are the verses written for Samut’s anthem. The hymn was already being sung in December 1922, mostly in governmental schools. The first time it was heard in public was on 27 December 1922 and again on 6 January 1923, during two concerts at the Manoel Theatre. However, during its two first appearances, someone had changed some verses from the first stanza. This angered Dun Karm, who protested by writing an article in a local newspaper. Ever since that day, not a single word has been changed. On 3 February 1923, another concert was held at the Manoel Theatre, performed by children from Sliema, with Dun Karm’s original verses. The hymn was played by the Duke of Edinburgh’s Band, of Vittoriosa.

The Maltese government declared the anthem as the official Maltese anthem on 22 February 1941. The Independence Constitution 1964 confirmed it as the National Anthem of Malta, which is today one of the symbols of Maltese identity.

On 25 March 1945, in the Gżira Stadium, a football match was held between a Malta XI and Hajduk Split, a team from Yugoslavia. At that time, Malta was still under British Imperial rule, and the British Governor was present. Before the game, the band played the anthem of Yugoslavia, and then it played that of Great Britain, due to Malta’s colonial status. As the governor was about to sit, the whole stadium stood up and sung the Maltese Anthem. The Governor, albeit embarrassed, stood up until the end of the anthem.

The Anthem is played every day on the media, and also during all the official duties of the President of Malta, of the Prime Minister of Malta, and those of other important governmental personalities. It is played daily in schools, and during all important National activities.