By: Enoch Sontonga
For: Quartet of Flutes
This music is in your basket
View basket
Loading... 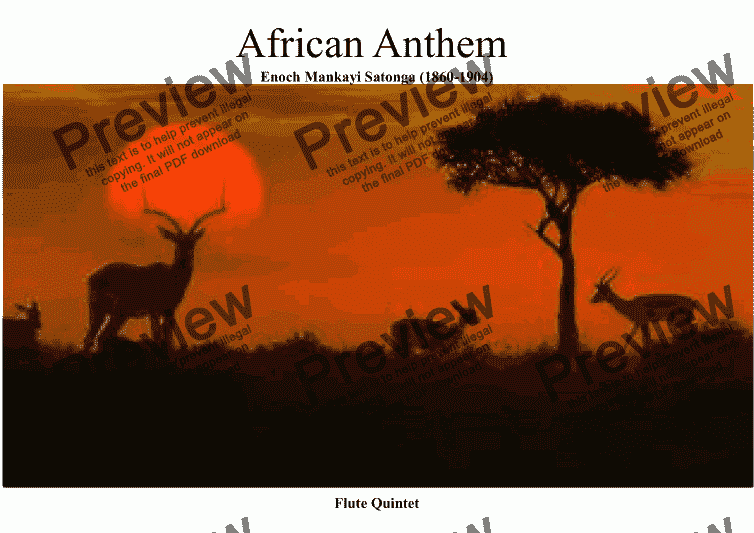 By: Enoch Sontonga
For: Quartet of Flutes

Composer
Enoch Sontonga
Year of composition
1897
Publisher
Music for all Occasions
Difficulty
Moderate (Grades 4-6)
Duration
1 minute
Genre
World music
License details
For anything not permitted by the above licence then you should contact the publisher first to obtain permission.

This is not an anthem for a nation, but for a whole continent. Originating with the Bantu people in South Africa, it is now sung throughout Africa in various languages. The melody is also used by Zambia, South Africa and Tanzania in their respective National Anthems.

"Nkosi Sikelel' iAfrika" (Xhosa pronunciation: [ŋkʼɔsi sikʼɛlɛl‿iafrikʼa], lit. 'Lord Bless Africa') is a Christian hymn originally composed in 1897 by Enoch Sontonga, a Xhosa clergyman at a Methodist mission school near Johannesburg. The song became a pan-African liberation song and versions of it were later adopted as the national anthems of five countries in Africa including Zambia, Tanzania, Namibia and Zimbabwe after independence. Zimbabwe and Namibia have since adopted new compositions for their national anthems. The song's melody is currently used as the national anthem of Tanzania and the national anthem of Zambia. In 1994, Nelson Mandela decreed that the verse be embraced as a joint national anthem of South Africa, with a revised version including elements of "Die Stem" (the then co-state anthem inherited from the previous apartheid government) adopted in 1997.

The hymn has often been considered the "African national anthem" due to its reverence of the African continent and the hymns use as liberation music. According to anthropologist David Coplan: " 'Nkosi Sikelel' iAfrika' has come to symbolize more than any other piece of expressive culture the struggle for African unity and liberation in South Africa."

"Nkosi Sikelel' iAfrika" was originally composed as a hymn in 1897 by Enoch Sontonga, a teacher at a Methodist mission school near Johannesburg. Some claim the melody is based on the hymn "Aberystwyth" by Joseph Parry, though others have called the connection far fetched. The words of the first stanza and chorus were originally written in Xhosa as a hymn. In 1927 seven additional Xhosa stanzas were added by the poet Samuel Mqhayi. Sontonga originally composed the hymn in B-flat major with a four-part harmony supporting a repetitive melody characteristic of "both Western hymn composition and indigenous South African melodies." The hymn was taken up by the choir of Ohlange High School, whose co-founder served as the first president of the South African Native National Congress. It was sung to close the Congress meeting in 1912, and by 1925 it had become the official closing anthem of the organisation, now known as the African National Congress."Sikelel' iAfrika" was first published in 1927. The song was the official anthem for the African National Congress during the apartheid era and was a symbol of the anti-apartheid movement. For decades during the apartheid regime it was considered by many to be the unofficial national anthem of South Africa, representing the suffering of the oppressed masses. Because of its connection to the ANC, the song was banned by the regime during the apartheid era.

A Swahili version of the hymn with modified lyrics is used as the national anthem of Tanzania under the name of "Mungu ibariki Afrika".

Zimbabwe: "Ishe Komborera Africa" was the Zimbabwean version of "God Bless Africa" sung in the Shona and Ndebele languages and was its first national anthem, adopted upon independence in 1980.

"Nkosi Sikelel' iAfrika" was used provisionally as the national anthem of Namibia at time of the country's independence in March 1990. But soon after, an official contest was organised for a new national anthem. It was won by Axali Doeseb, who wrote "Namibia, Land of the Brave" which was officially adopted on the first anniversary of the country's independence, in 1991.

If you require an arrangement not found in my store, let me know your requirements, my rates are very reasonable: keithterrett@gmail.com