By: J. S. Bach
For: String orchestra
This music is in your basket
View basket
Loading... 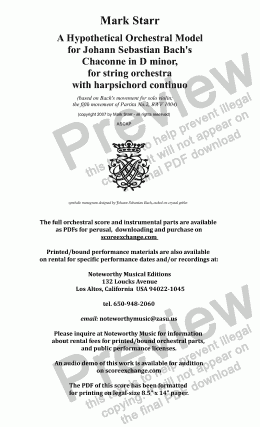 I call this realization of Bach’s Chaconne – originally for solo violin and now for string orchestra with harpsichord continuo – a Hypothetical Orchestral Model, rather than an arrangement.

First, it has little in common with well-known (or notorious, depending on your point of view) arrangements of Bach’s music by Leopold Stokowski and many other arrangers in the same vein. In their massive orchestrations for symphony orchestra, these arrangers posed the following question to their listeners: what would Bach’s music sound like if Bach had had at his disposal all of the technical and timbral resources of the modern symphony orchestra (and the services of more than 100 musicians)? In my Hypothetical Orchestral Model, I pose a very different question for my listeners: what might the Chaconne have sounded like if Bach had decided to arrange it for an orchestral ensemble that was readily available to him at various stages in his career? The orchestral ensemble I have selected is the same that Bach utilized in such works as the Third Brandenburg Concerto and the famous Air from the Orchestral Suite No. 3.

Secondly, in order to realize this work for string orchestra and harpsichord continuo, it was necessary to complete all of the interruped contrapuntal lines (including the frequently disappearing bass line) and harmonies that are only suggested in Bach’s original for violin solo. Consequently, this realization required considerably more speculative composition than would be found in a typical Bach orchestration.

And lastly, this orchestration is the realization of my speculative hypothesis that Bach’s version of the Chaconne for solo violin may have been a transcription of an earlier composition for orchestra or instrumental ensemble – a composition that, like an estimated one-third of his entire output, was lost following his death. This Hypothetical Orchestral Model is my speculative attempt to re-construct what may have been in the mind of Bach before he evidently reduced the Chaconne into a work for solo violin. To examine some of the internal evidence in the chaconne for such a hypothesis, please read the my introduction in the orchestral score.

Significantly, I am not alone in maintaining this hypothesis. Many years after I had finished this hypothetical orchestral model (during which time it was performed at least a dozen times by various chamber orchestras,) I came across an orchestration of the Chaconne for full orchestra by the 19th Romantic composer by Joachim Raff (1822-1882.) In his introduction, Raff outlined the same hypothesis as mine – that the version for solo violin was in reality a reduction of a large-scale instrumental piece. However, in his orchestration, Raff could not resist the temptation of including all the newly perfected instruments of the Romantic symphony orchestra.

My hypothetical orchestral model of Bach’s Chaconne was recently performed by the New Century Chamber Orchestra in San Francisco, conducted (from the first chair) by the noted violinist/conductor Nadja Salerno-Sonnenberg.

In addition to perusing this score online, you can also listen online to a digital demo recording of my realization of Bach’s Chaconne on Score Exchange by clicking on the button marked AUDIO.

Professional orchestras may prefer renting a full set of printed and bound orchestral parts and scores. In that case, please contact Noteworthy Musical Editions at noteworthymusic@zasu.us to inquire about rental fees for performance materials.

Lastly, please let me know what you think of this realization of Bach’s Chaconne - either by email (just click the button EMAIL THE PUBLISHER) or with an online review. I am always interested to read listeners’ comments.