Invocation and Healing Rain for 3 Guitars and Tibetan finger cymbals

By: Jeffrey Goodman
For: Trio of Acoustic Guitars [notation]
This music is in your basket
View basket
Loading... 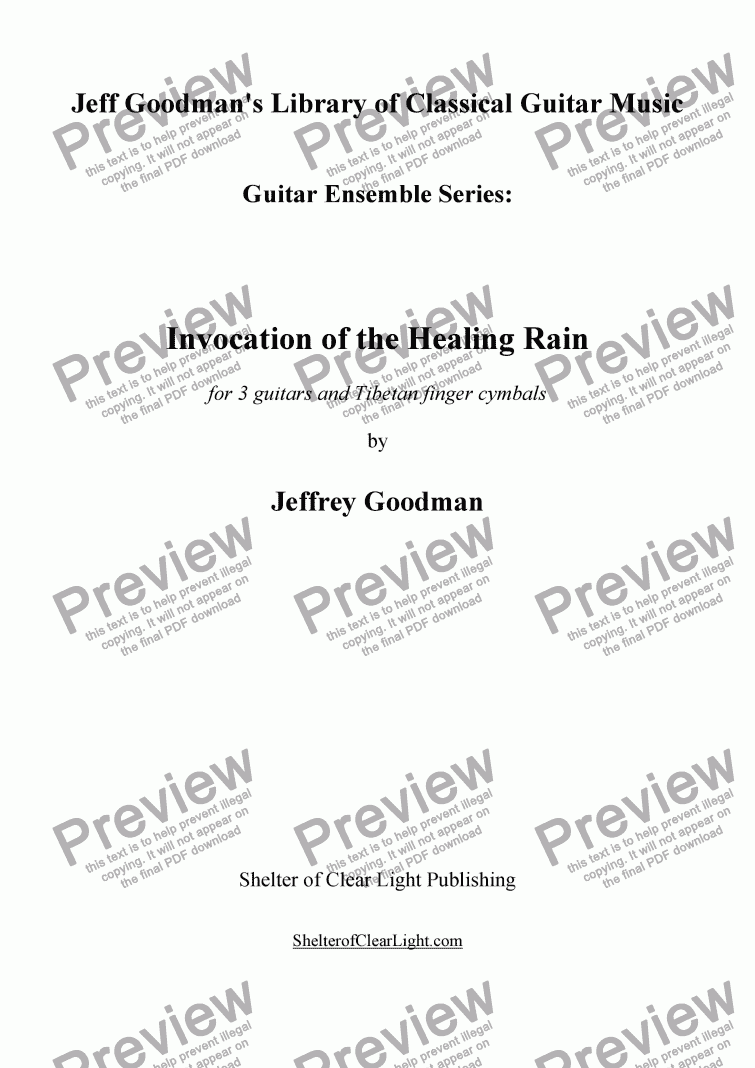 Invocation and Healing Rain for 3 Guitars and Tibetan finger cymbals

By: Jeffrey Goodman
For: Trio of Acoustic Guitars [notation]

Composer
Jeffrey Goodman
Year of composition
2009
Difficulty
Moderate (Grades 4-6)
Duration
7 minutes
Genre
Modern classical music
License details
For anything not permitted by the above licence then you should contact the publisher first to obtain permission.

Invocation of the Healing Rain, for 3 guitars and Tibetan finger cymbals, is an ensemble piece that explores both traditional and more advanced techniques of the guitar.

As the title suggests, there is a programmatic element. The players and audience are invited to imagine a cloudy day with a prospect of gentle rain. It begins with a Tibetan finger cymbal that presages the coming rain with a motif of three high f#s. Ripples of descending arpeggios, in waves of unsynchronized articulations, lead to a brief passage of natural harmonics that evoke the first moments of rainfall.

A solitary guitarist is imagined to be in his or her study. Aware of the falling rain, with its subtle rhythms and incidental pitch content when it splashes against a window pane or trills upon other objects outside the study, the guitarist begins with a few measures of the iconic flamenco piece Malagueña.

Separated by varied transitions - suggestive of rain, wind and soft thunder in the distance, the guitarist plays a series of short quotations from the guitar repertoire. After the Malagueña we hear the Romance d�Amour, Scarborough Faire (in duet form), and then Juaquin Rodrigo�s Concerto de Aranjuez �" 2nd movement.

The guitarist, deep in meditation on both the rain outside his study and the music he is playing, hears a mysterious and compelling melodic motif of natural harmonics. At first he cannot identify the music the harmonics remind him of. More harmonics sound. With a sudden insight he plays the first measure of J. S. Bach�s Prelude from the first cello suite. He listens again and hears a second set of harmonics. He plays the 2nd measure of the Bach Prelude.

After the Bach there is a somewhat dreamy transition to a brief quotation of Erik Satie�s Gymnopedie #1, here transcribed from the original for piano. The piece concludes with a simple recapitulation of the opening elements. (Total duration: about 7 minutes)

Sorry, there's no reviews of this score yet. Please .
In order to submit this score to ScoreExchange.com Jeffrey Goodman has declared that they own the copyright to this work in its entirety or that they have been granted permission from the copyright holder to use their work. If you believe that this score should be not available here because it infringes your or someone elses copyright, please report this score using the copyright abuse form.