By: Peter I. Tchaikovsky
For: String quartet
This music is in your basket
View basket
Loading... 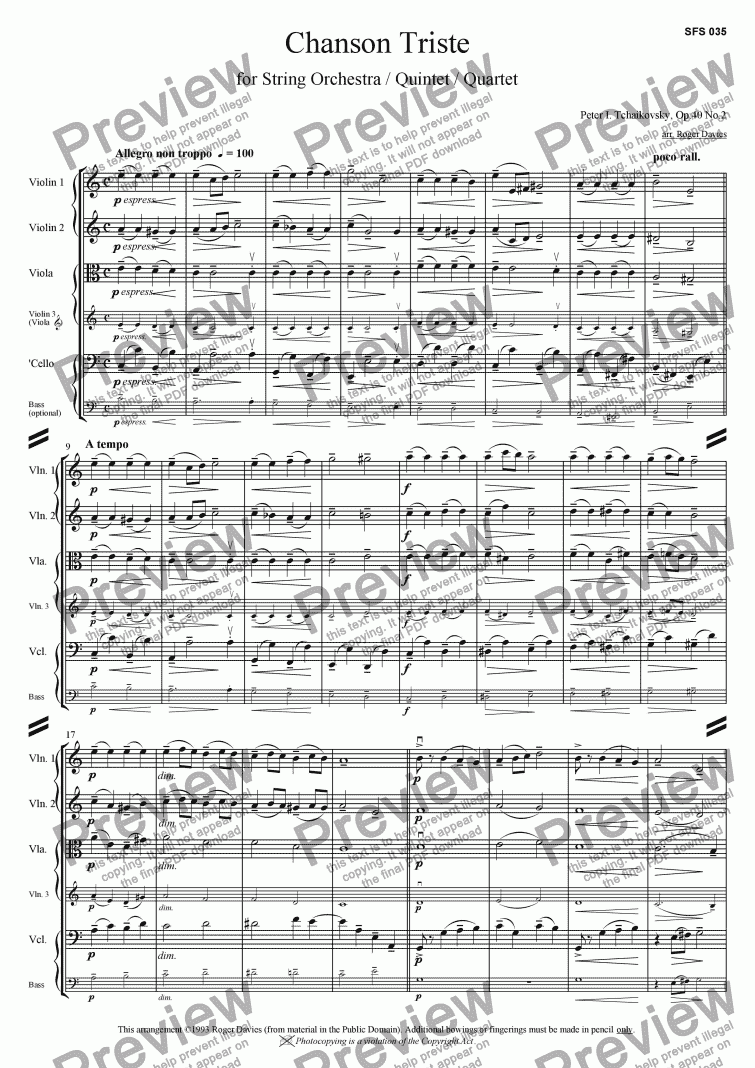 By: Peter I. Tchaikovsky
For: String quartet

Composer
Peter I. Tchaikovsky
Year of composition
1876
Arranger
Glynn Davies
Difficulty
Moderate (Grades 4-6)
Duration
3 minutes
Genre
Classical music
License details
For anything not permitted by the above licence then you should contact the publisher first to obtain permission.

Known as a salon piece, Tchaikovsky's Chanson Triste, the second of the twelve short piano compositions, published as Douze morceaux (difficult? moyenne), is typical of the numerous Romantic miniature composed, as the title indicates, for amateur pianists. Deceptively slight, of an almost transparent simplicity, this morceau nevertheless captivates the listener with its disarming sincerity. Indeed, the inner narrative, carried by the fluid momentum of the music, may suggest feelings of subdued, almost forgotten, sadness, but the music remains engaging throughout the piece, sometimes even rising to a discernible level of dramatic intensity, which eventually, toward the end, yields to an aural mist, in which the initially adumbrated melancholy slowly, gradually, like a weakening echo, disappears in the abyss of an unremembered past.

Tchaikovsky composed Chanson triste in 1878, a turbulent year, marked by his struggle to distance himself from his estranged wife, Antonina, who rejected a suggested divorce. In the midst of his emotional turmoil, the composer managed to find some peace at Kamenka, where he had use of a cottage. There, while working on his Piano Sonata in G major, Op. 37 and the Album for Children, Op. 39, Tchaikovsky composed the twelve pieces which include the Chanson triste.

This arrangement features a supplemental third violin part and an additional bass part for use with string orchestra.

Reviews of Chanson Triste, Op.40 No.2