By: Irish folk song
For: Concert band / wind band
This music is in your basket
View basket
Loading... 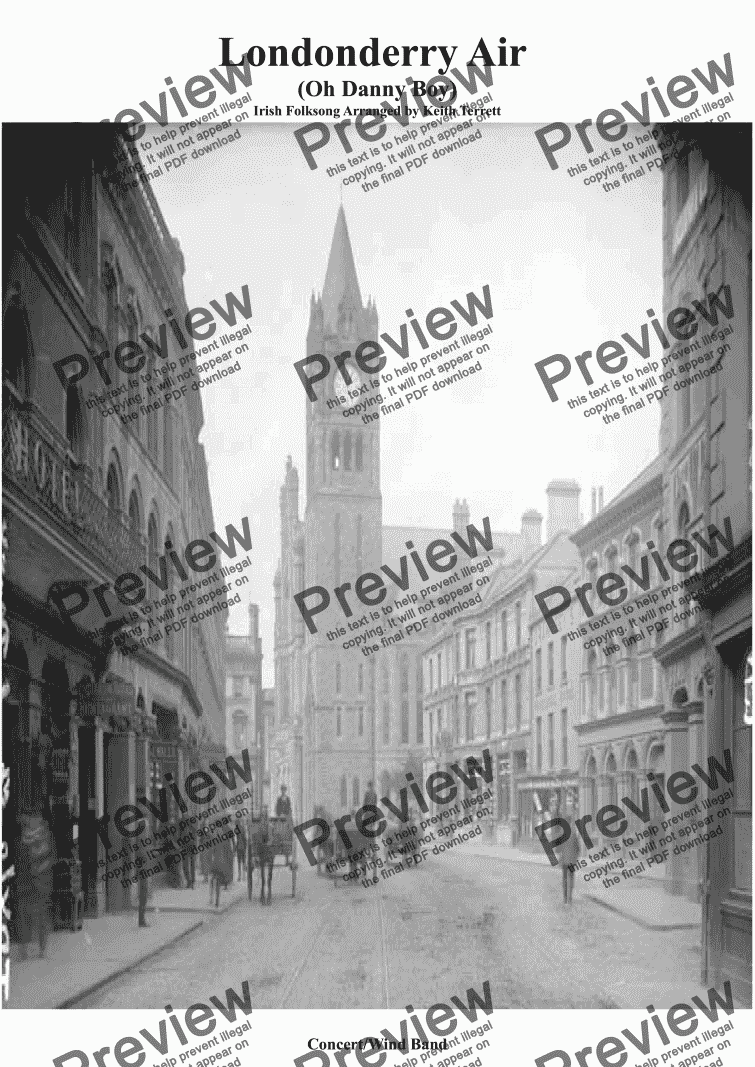 Composer
Irish folk song
Arranger
Keith Terrett
Year of arrangement
2009
Publisher
Music for all Occasions
Difficulty
Moderate (Grades 4-6)
Duration
2 minutes
Genre
Classical music
License details
For anything not permitted by the above licence then you should contact the publisher first to obtain permission.

An arrangement of Londonderry Air for Concert Band.

The Londonderry Air is an air that originated from County Londonderry in Ireland (now Northern Ireland). It is popular among the Irish diaspora and is very well known throughout the world. The tune is played as the victory anthem of Northern Ireland at the Commonwealth Games. "Danny Boy" is a popular set of lyrics to the tune.

The title of the air came from the name of County Londonderry in contemporary Northern Ireland. The air was collected by Jane Ross of Limavady.

Ross submitted the tune to music collector George Petrie, and it was then published by the Society for the Preservation and Publication of the Melodies of Ireland in the 1855 book The Ancient Music of Ireland, which Petrie edited. The tune was listed as an anonymous air, with a note attributing its collection to Jane Ross of Limavady.

For the following beautiful air I have to express my very grateful acknowledgement to Miss J. Ross, of New Town, Limavady, in the County of Londonderry—a lady who has made a large collection of the popular unpublished melodies of the county, which she has very kindly placed at my disposal, and which has added very considerably to the stock of tunes which I had previously acquired from that still very Irish county. I say still very Irish, for though it has been planted for more than two centuries by English and Scottish settlers, the old Irish race still forms the great majority of its peasant inhabitants; and there are few, if any counties in which, with less foreign admixture, the ancient melodies of the country have been so extensively preserved. The name of the tune unfortunately was not ascertained by Miss Ross, who sent it to me with the simple remark that it was 'very old', in the correctness of which statement I have no hesitation in expressing my perfect concurrence.

This led to the descriptive title "Londonderry Air" being used for the piece; the title "Air from County Derry" or "Derry Air" is sometimes used instead,[citation needed] due to the Derry-Londonderry name dispute.

The origin of the tune was for a long time somewhat mysterious, as no other collector of folk tunes encountered it, and all known examples are descended from Ross's submission to Petrie's collection. In a 1934 article, Anne Geddes Gilchrist suggested that the performer Ross heard played the song with extreme rubato, causing Ross to mistake the time signature of the piece for common time (4/4) rather than 3/4. Gilchrist asserted that adjusting the rhythm of the piece as she proposed produced a tune more typical of Irish folk music.

In 1974, Hugh Shields found a long-forgotten traditional song which was very similar to Gilchrist's modified version of the melody. The song, Aislean an Oigfear (recte Aisling an Óigfhir, "The young man's dream"), had been transcribed by Edward Bunting in 1792 based on a performance by harper Donnchadh Ó Hámsaigh (Denis Hempson) at the Belfast Harp Festival. Bunting published it in 1796. Ó Hámsaigh lived in Magilligan, not far from Ross's home in Limavady. Hempson died in 1807. In 2000, Brian Audley published his authoritative research on the tune's origins. He showed how the distinctive high section of the tune had derived from a refrain in "The Young Man's Dream" which, over time, crept into the body of the music. He also discovered the original words to the tune as we now know it which were written by Edward Fitzsimmons and published in 1814; his song is "The Confession of Devorgilla", otherwise known by its first line "Oh Shrive Me Father".

The descendants of blind fiddler Jimmy McCurry assert that he is the musician from whom Miss Ross transcribed the tune but there is no historical evidence to support this speculation. A similar claim is made that the tune came to the blind itinerant harpist Rory Dall O'Cahan in a dream, and a documentary detailing this version was broadcast on the Maryland Public Television in USA in March 2000.;reference to this was also made by historian John Hamilton in Michael Portillo's TV programme "Great British Railway Journeys Goes to Ireland" in February 2012.