By: W. A. Mozart
For: Orchestra
This music is in your basket
View basket
Loading... 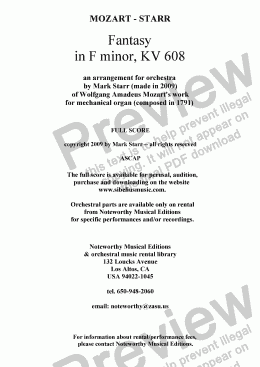 By: W. A. Mozart
For: Orchestra

Composer
W. A. Mozart
Year of composition
1791
Arranger
Mark Starr
Publisher
Noteworthy Musical Editions
Difficulty
Difficult (Grades 7+)
Duration
8 minutes
Genre
Classical music
License details
For anything not permitted by the above licence then you should contact the publisher first to obtain permission.

The second of Mozart's two fantasies for large mechanical organ, the Fantasy in F minor KV 608, is one of his greatest instrumental works. It was composed for Count Joseph Deym von Stritez' cylinder mechanism in the Muller Exhibition Hall in Vienna in 1791 - the year of Mozart's death and just a few months before the composer finished writing The Magic Flute. KV 608 is, in my opinion, a monumental work that, musically speaking, ranks among any of the movements in Mozart's final three symphonies. In terms of dramatic power, polyphonic complexity, memorable themes, compositional virtuosity, and harmonic adventurousness, it has few peers in Mozart's immense catalogue of instrumental works. At more than eight minutes in duration, it is one of Mozart's grandest architectural structures - creating a new form in which the elements of an entire multi-movement symphony are coherently organized into one organic movement.

In terms of musical content, the recurring theme is about as close to Beethovenian rage as Mozart ever came. In the slow section in the middle, one can hear Mozart at his most sublime. The polyphonic writing in the fugues is almost as complex as that in the finale of the 'Jupiter' Symphony. And the chromatic second subject of the double fugue that concludes the work resembles a wild Hungarian gypsy dance that suggests the anachronistic hand of Johannes Brahms

That such an extraordinary late work by Mozart has remained, until now, virtually unknown to the general music-listening public is the result of a lack of a suitable medium for performance. Attempts by human organists to play the work (and there have been several) are, in my opinion, pathetic and give little idea of this music's power and beauty. Mozart composed this music for a machine that could play any combination of notes at any speed. Freed from the limitations of ten fingers and two feet, he composed a piece that went far beyond human capabilities. In a letter to his wife, Mozart confided that he hated the sound of the 'small pipes' of Count Deym's instrument. But the primitive sonorous resources of this instrument did not deter Mozart from envisioning a colossal creation - which he wrote out on four staves, with no dynamics or coloristic suggestions. In my view, Mozart conceived this work in his mind's ear for orchestra - and it is only with the expanded technical and sonic resources of a full orchestra (full, that is, for Mozart's time) that all the musical elements in this vast work can be heard distinctly and fully appreciated.

If you would like to listen to Mozart's other Fantasy originally composed for mechanical organ, KV 594, just jump down to the bottom of the page after this movement has finished. You will find a box labeled Associated Scores, and in this box is a link to the other Fantasy.

In addition to perusing the score online and hearing it played by SCORCH using basic MIDI sounds, you can also listen online to an MP3 made with enhanced musical sounds. And if you wish, you can download this MP3 file free-of-charge for repeated listening.

Please let me know what you think of this orchestral arrangement of Mozart's Fantasy KV 608, originally for mechanical organ - either by email (just click the button EMAIL THE PUBLISHER) or with an online review. I am always interested to read listeners' comments.