By: Franz Schubert
For: String quartet
This music is in your basket
View basket
Loading... 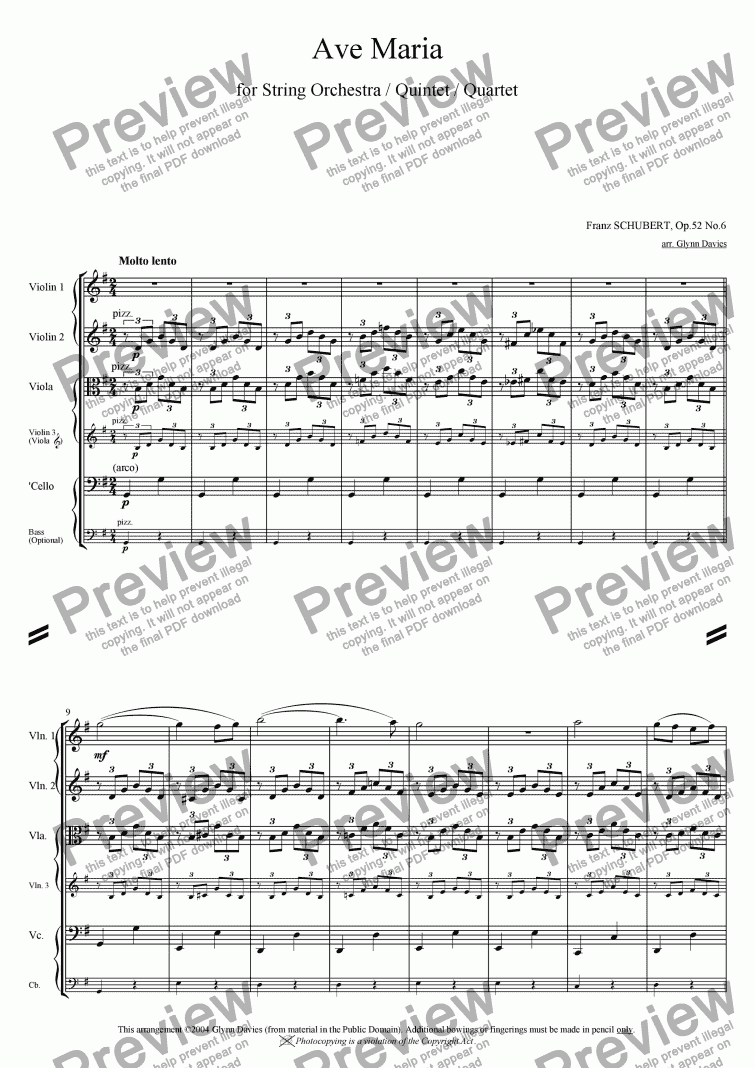 By: Franz Schubert
For: String quartet

Composer
Franz Schubert
Year of composition
1825
Arranger
Glynn Davies
Difficulty
Moderate (Grades 4-6)
Duration
2 minutes
Genre
Classical music
License details
For anything not permitted by the above licence then you should contact the publisher first to obtain permission.

This song is a setting of text from near the closing of Canto III from Sir Walter Scott's "The Lady of The Lake", in a translation by Adam Storck. It was composed in April, 1825, when Schubert also fashioned Ellens Gesang I and Ellens Gesang II. This third effort is probably the most successful and most popular. Even the composer spoke of its immediate widespread appeal in a letter to his parents in July, 1825, shortly after its first performances. He also indicated that he felt a certain religious devotion when he wrote it, one that came to him naturally and effortlessly. Ellens Gesang III was first published in 1826.

The melody of Ellens Gesang III (Ellen's Song) is attractive and the mood has both a secular and religious feel, at times an even operatic one. The piano accompaniment is gentle and harp-like, quite typical of the composer in this kind of music. The text begins, "Ave Maria! Maiden mild! Listen to a maiden's prayer!" Ellen prays as the clansmen are encouraged to defend their soil from the oncoming royal armies.

In the end, this is one of the composer's most successful songs, written at a time when he was at the height of his powers. Even though his life was cut short when he died before his thirty-second birthday, probably of syphilis he had contracted some years before, he had already become one of the greatest masters of the lied and might have gone on, as his "Great" C major Symphony suggests, to become an equally great composer of orchestral music.

This arrangement features a supplemental third violin part with an additional bass part for use with string orchestra.