By: Sir Edward Elgar
For: String quartet
This music is in your basket
View basket
Loading... 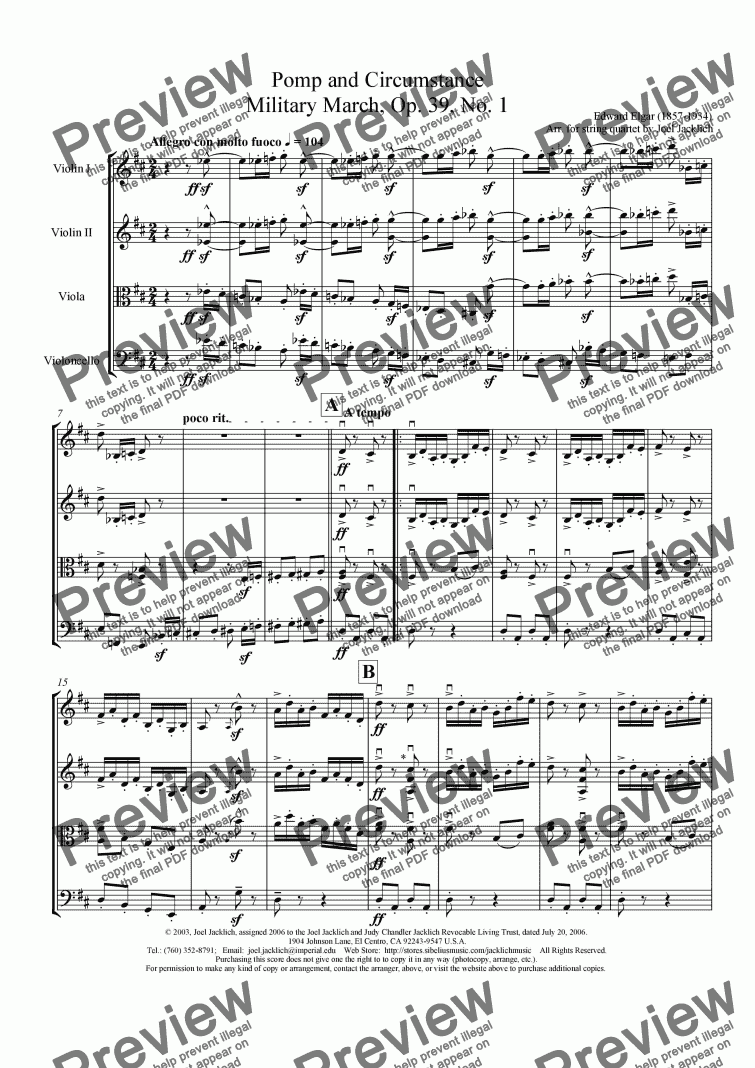 March No. 1, here arranged for string quartet, was composed in 1901. It is the first of 6 marches, the first five completed by Elgar:

The best known of the set, it had its premiere, along with the more reserved second March, played by the Liverpool Orchestral Society conducted by Alfred Rodewald, in Liverpool on 19 October 1901. Both marches were played two days later at a London Promenade Concert in the Queen's Hall London, conducted by Henry Wood, with March No. 1 played second, and the audience "… rose and yelled .. the one and only time in the history of the Promenade concerts that an orchestral item was accorded a double encore."

The Trio contains the tune known as "Land of Hope and Glory". In 1902 the tune was re-used, in modified form, for the Land of hope and glory section of his Coronation Ode for King Edward VII. The words were further modified to fit the original tune, and the result has since become a fixture at the Last Night of the Proms, and an English sporting anthem.

In the United States, the Trio section "Land of Hope and Glory" of March No. 1 is sometimes known simply as "Pomp and Circumstance" or as "The Graduation March", and is played as the processional tune at virtually all high school and college graduation ceremonies.[5] It was first played at such a ceremony on 28 June 1905, at Yale University, where the Professor of Music Samuel Sanford had invited his friend Elgar to attend commencement and receive an honorary Doctorate of Music. Elgar accepted, and Sanford made certain he was the star of the proceedings, engaging the New Haven Symphony Orchestra, the College Choir, the Glee Club, the music faculty members, and New York musicians to perform two parts from Elgar's oratorio The Light of Life and, as the graduates and officials marched out, "Pomp and Circumstance" March No. 1. Elgar repaid the compliment by dedicating the Introduction and Allegro to Sanford later that year.[6] The tune soon became de rigueur at American graduations, but then as a processional at the opening of the ceremony, instead of the original recessional by Yale.

Reviews of Pomp and Circumstance March, Op. 39, No. 1 for String Quartet (Professional Version)