Sign in / Register
HomeInstrumentationsOrchestraMOZART - STARR; Adagio in B minor, KV 540, for orchestra (originally for piano)

MOZART - STARR; Adagio in B minor, KV 540, for orchestra (originally for piano)

By: Wolfgang Amadeus Mozart
For: Orchestra
This music is in your basket
View basket
Loading... 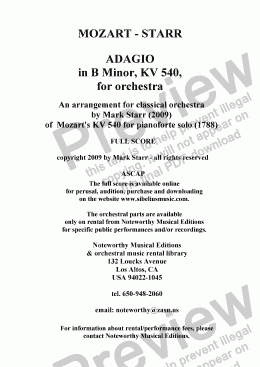 MOZART - STARR; Adagio in B minor, KV 540, for orchestra (originally for piano)

By: Wolfgang Amadeus Mozart
For: Orchestra

The Adagio in B minor, KV 540, is one of Mozart's most mysterious and soul-searching works. Originally composed for piano, it is an orphan movement. It is not part of a piano sonata or a suite of movements. Nor is it an unfinished piece. Mozart entered the composition into his personal catalog of finished works, dated Vienna, March 19, 1788. He also noted the key, B Minor, in his personal catalog.

This the only complete work in B Minor that Mozart ever composed - although there is one movement, the slow movement of Mozart's early D major Flute Quartet, KV 282, that is also in B minor. There are no piano sonatas in B minor - or symphonies, string quartets or violin sonatas, for that matter. Many writers have conjectured that each key held a specific emotional significance and color for Mozart. If that was so, then from this one towering example dating from Mozart's mature years we may infer that, to the composer, B Minor meant desolation.

But this piece has a surprise ending. It is the musical equivalent of an O. Henry twist at the end. I won't spoil it for those who have never heard the piece before. The philosophical and emotional implications of this ending are highly significant.

When I first read through this piece years ago, I said to myself: this is not piano writing. The orchestral nature of the piece jumped off the page. Everything is sustained and polyphonic. Within the soft sostenuto texture, Mozart has added heavy sf accents, the sort of weight he typically gave to the strings in his symphonies by doublings with woodwinds and horns on selected notes.

The many repeated 16th-notes, when played forte, become tiresome on the percussive piano (and even more so on the fortepiano) - but they sound deeply moving when played by a string section.

I resolved then to orchestrate the piece, but it was only recently that I undertook the task. The movement is scored for a typical Mozart symphony orchestra of his last years. With repeats, it lasts about 11 minutes. Eleven minutes makes for a long adagio – but these are eleven minutes of pure inspiration. In my opinion, performance of this late masterpiece by an orchestra results in an overwhelming emotional experience.

In addition to perusing the score with SCORCH and listening to the music produced with basic MIDI sounds, you can also listen online to the MP3 recording of the piece, produced with enhanced musical sounds. And, if you wish, you can download this MP3 file for repated listening.

I hope you will let me know what you think of my orchestral arrangement of Mozart's Adagio, KV 540. You can either drop me an email by clicking on the button EMAIL THE PUBLISHER; or write an online review. I am always interested in reading comments from listeners on my works and orchestrations.

Reviews of MOZART - STARR; Adagio in B minor, KV 540, for orchestra (originally for piano)