By: Friedrich Nietzsche
For: Choir + orchestra
This music is in your basket
View basket
Loading... 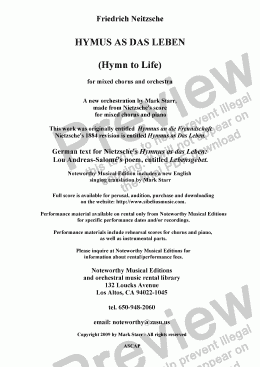 By: Friedrich Nietzsche
For: Choir + orchestra

Many readers of Friedrich Nietzsche’s philosophical writings may be unaware that Nietzsche composed a considerable number of musical works in his youth. If it were not for several events in his personal life that led him in another direction, Nietzsche might well have followed his ambitions to become a composer. Judging from this inspiring and emotionally-overwhelming work - Hymnus an das Leben - Nietzsche had the musical imagination, and a sufficiently solid (though self-taught) musical training, to make his mark in the world of music. But the brilliance of his university studies led him first to philology, and then to philosophy. At the age of 24, before obtaining his doctorate, he was appointed Professor of Classical Philology at the University of Basel. He is still one of the youngest tenured professors in history. And, of course, he continues to be one of the world’s most-widely read and revered authors.

Nietzsche composed music into his thirties, but he ran into a stone wall with some major musical figures, who condescendingly treated his musical creations as the dabblings of a dilletant. He may not have been a professional composer, but neither was he a dilletant. He sent the score of the Hymnus as das Leben to the conductor Hans von Bulow - who didn’t acknowledge receiving it, much less respond to Nietzsche about its musical qualities. Later, Nietzsche wrote to von Bulow that history would record he had insultingly ignored the greatest mind of the century.

Nietzsche also sent the score to the conductor Felix Mottl (who also declined to perform it.) In a letter to Mottl, Nietzsche made a revealing statement - that after his death, the Hymnus as das Leben would serve as his testament.

In the early 1870s, Nietzsche had cordial relations with Wagner. Nietzsche conducted a private performance of the first version of the Hymnus for Wagner at Triebschen, the villa of Wagner and Cosima in Lucerne. Wagner patronizingly told him that he was delighted to hear musical ideas that he recognized as his own. Nietzsche was infuriated by Wagner’s observation. Later, Cosima observed that this incident was the beginning of the estrangement between the two men. Eventually, Nietzsche begame one of Wagner’s most hostile opponents.

Wagner was fooling himself. There is no Wagner in this music. On the contrary, the major influences are Schumann and Brahms - specifically the Brahms of the little-known but monumental work Triumpflied.

Nietzsche’s sister wrote that her brother longed for music full of happiness, pride, high spirits, power "yet held within bounds by the highest laws of style." His bitter experience with Wagner’s art of "glorified unrestraint," had robbed him of all joy in his passionate interest in music. He considered Wagner’s music morbid and depressing.

The composer with whom Nietzsche draws the closest comparison here is the young Gustav Mahler. The main problem with such a comparison, however, is chronology. In 1874, when Nietzsche composed the first version of the Hymnus, Mahler was then 14 years old, yet to enter the Vienna Conservatory. In 1884, when Nietzsche completed the revised version (which I used as the source for my orchestration,) Mahler had finished his first major composition, Das Klagende Lied, but this work would not be performed until years later. In other words, there is no possibility that Nietzsche was influenced by Mahler. Nevertheless, there are many striking similarities between Nietzsche and the young Mahler, in addition to a common harmonic language and the high-minded philosophical concepts expressed in their music. Mahler, like Nietzsche studied philosophy and history at university. Later, Mahler used texts drawn from Nietzsche in his Eighth Symphony.

Surprisingly, the text for the Hymnus is not by Nietzsche, but rather by a remarkable woman, the poetess, psycho-analyst and novelist Lou Andreas-Salomé. At the time, she was a student of Nietzsche. He was passionately in love with her - but his passion was left unrequited. Later, she became the author of a major study on Nietzsche and 15 novels; and she was closely involved (professionally and personally) with many major 19th Century and early 20th Century figures (including Sigmund Freud and the poet Ranier Maria Rilke.) Salomé’s text is an exhuberant affirmation and celebration of life, with both its joys and its pain. It is also an in-your-face challenge to the morbid obsession with death found in the major philosophical currents of the time: Wagner’s operas, Schopenhauer and religion.

In my orchestration of the Hymnus, I have made a new English singing translation of Salomé’s poem. Moreover, I have indicated that one phrase of the work should also be sung by the audience – as was done with hymns in Bach cantatas, and later in a cantata by Paul Hindemith, The Canticle of Peace (which I sang myself in the audience in a performance at Carnegie Hall.) It was Nietzsche’s hope that the philosphy expressed in this work would eventually replace religion. Moreover, he wrote that he composed this work to "lure" the public into an acceptance of his philosophical approach to life. I suspect he would have been delighted by an audience singing this one phrase.

My orchestration of the work is intended to replace the turgid, tepid and frankly incompetent orchestration made by Nietzsche’s amenuensis, Peter Gast – which was the nickname that Nietzsche gave to his secretary, the failed composer Heinrich Köselitz. If you will excuse the pun, his orchestration is, in my opinion, ghastly. Its weakness may well have been the deciding factor in Nietzsche’s failure to get the work performed by leading conductors of his time. There is no doubt what sort of orchestration Nietzsche envisioned for this work. His direction at the head of the score is: "with heroic feeling." That is the character that I have tried to create with my large-scale orchestration.

You can peruse the full score with SCORCH, while listening to it play with basic MIDI sounds. In addition, you can listen to an MP3 recording made with enhanced musical sounds. If you wish, you can download this MP3 demo recording free-of-charge for multiple listenings.

I hope listeners will express their opinions about Nietzsche’s Hymnus an das Leben (and my orchestration of the work) - either in online reviews or in an email to me (just click on the EMAIL THE PUBLISHER button.) I am always interested in reading listeners’ reactions to my compositions and my orchestrations.