Sign in / Register
HomeInstrumentationsSolo instrument + pianoRAVEL - STARR; Trois beaux oiseaux de Paradis, for flute and piano (a reduction of the arrangement for flute and string orchestra)

RAVEL - STARR; Trois beaux oiseaux de Paradis, for flute and piano (a reduction of the arrangement for flute and string orchestra)

By: Maurice Ravel
For: Solo Flute + piano
This music is in your basket
View basket
Loading... 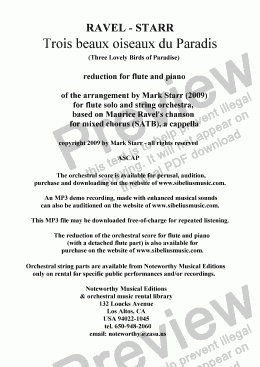 RAVEL - STARR; Trois beaux oiseaux de Paradis, for flute and piano (a reduction of the arrangement for flute and string orchestra)

Here is the reduction for flute and piano of my arrangement for flute solo and string orchestra of a little-known chanson that Ravel composed for mixed chorus, a cappella. It is, I think, one of the most moving moments in all of music.

Ravel wrote the words for the song, as well as the music. In his poem, a young girl describes three birds-of-paradise. The first is blue - "more blue than the sky." The second is white - "the color of snow." The third is red - "a shade of crimson" (the color of blood.)

Ravel wrote the poem and the music in 1914, the first year of what is still referred to in France as The Great War. Civilization was crumbling around Ravel, and the very existence of his homeland was threatened. Of course, the three birds-of-paradise represent France.

The song is strophic, in three refrains and a short coda. Each refrain represents a bird-of-paradise; and in the coda, the young girl is told: "Your beloved has gone off to war."

This is the saddest music I know.

You can peruse through the reduction for flute and piano with SCORCH, while listening to the music played by basic MIDI sounds. You can also listen to the MP3 demo recording, attached. It was made with enhanced musical sounds. If you wish, you can download this MP3 recording free-of-charge for repeated listening.

I hope that listeners will express their opinions about Maurice Ravel's Trois beaux oiseaux de Paradis, and my arrangements of this piece – either in an online review, or in an email to me (just click on the button marked EMAIL THE PUBLISHER.) I am always interested to read listeners' comments on my compositions and arrangements.

Reviews of RAVEL - STARR; Trois beaux oiseaux de Paradis, for flute and piano (a reduction of the arrangement for flute and string orchestra)