By: Alexander Scriabin
For: Orchestra
This music is in your basket
View basket
Loading... 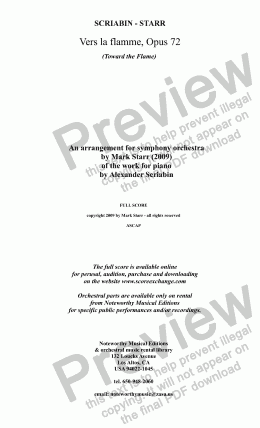 By: Alexander Scriabin
For: Orchestra

The poem Vers la flamme is one of Scriabin’s quintessential masterpieces. Packed into its six minutes’ duration are all of the features that distinguished his late works as among the most imaginative and musically advanced of the early 20th Century. Written for piano solo a year before the composer’s death, the work appears to me to have been conceived for orchestra – and there is much internal evidence in the published piano score that supports this view.

Vers la flamme is one organic crescendo that commences in the lowest and darkest sonic regions. It slowly progresses to cover the entire spectrum of tone color, terminating in an incandescent flash of white heat. Thematically, the entire work is developped from two notes: a descending minor second.

Scriabin believed it was the ultimate destiny of the universe to be consumed in a cosmic incendiary apocalypse. This piece is the ecstatic musical expression of that philosophical idea.

I have scored this highly complex music for a very large symphony orchestra. The sounds and the complex rhythyms may exceed the playback capabilities of your computer with SCORCH, even using basic MIDI sounds. In that event, I suggest that you listen to the attached MP3 demo recording (just click the button marked LISTEN TO MP3.) This demo recording was made with enhanced musical sounds, and it was recorded on several layers. You can, if you wish, download this MP3 demo recording, free-of-charge, for repeated listening.

I hope listeners will express their opinions about Scriabin’s Vers la flamme, and my orchestration of it – either in an online review or in an email to me (just click on the button marked EMAIL THE PUBLISHER.) I am always interested to read comments of those who listen to my compositions and orchestrations.