By: Ludwig van Beethoven
For: Orchestra
This music is in your basket
View basket
Loading... 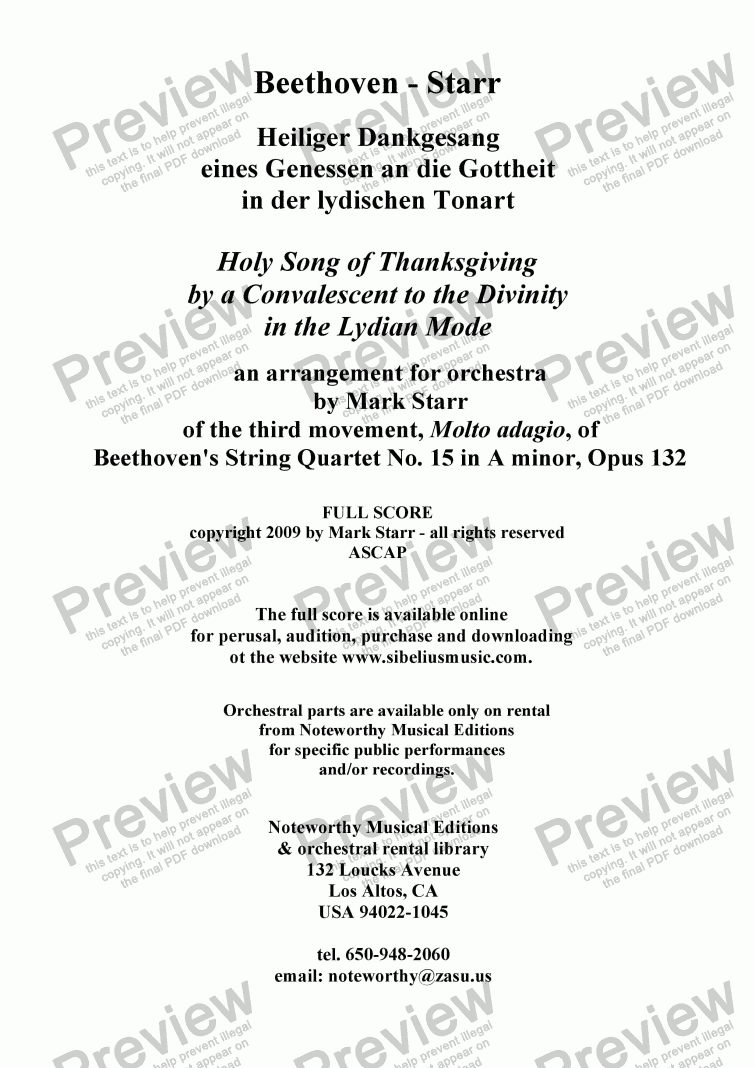 By: Ludwig van Beethoven
For: Orchestra

In 1825, Beethoven fell gravely ill. In addition to liver disease, it is now known (from recent analysis of strands of his hair) that he suffered from slow lead poisoning - probably from medications that were prescribed for him. He wrote a note to his doctor (the note has survived) urging the physician to come see him immediately to ease his pain, as he was suffering greatly. Though bed-ridden for months, Beethoven survived the illness – although it is now clear that he believed he came very close to death.

Following his partial recovery, he composed his final five string quartets. The String Quartet No. 15 in A minor, opus 132, contains a vast movement (the third, Molto Adagio) that is a musical description of his near-death experience and an expression of his thanks to God for survival. This movement stands out not only as one of the composer's most intimate declarations of his faith, but also as one of his greatest musical works.

In five continuous sections, this 14-minute piece is one of Beethoven's most expansive creations. There are so many musical ideas crammed into the Heiliger Dankgesang, it fairly bursts at the seams. Yet, all of these ideas can barely be contained by a string quartet. I decided to orchestrate this work, not only to explore the sonorities that I believe are only hinted at in string quartet form, but also to clarify audibly these complex musical ideas – by differentiating them through contrasting instrumental timbres.

Perhaps the greatest audible revelation is the hymn (which appears to be original) that is embedded into the fabric of the Holy Song. In the central (third) section, Beethoven presents this hymn tune in whole notes against dense polyphonic writing. But in the final section (the fifth,) Beethoven distintegrates the hymn tune into fragments and superimposes those fragments one on top of another, irregularly, like a patchwork quilt. In this final section, especially, the varied timbres of the woodwinds and horns will help the listener follow the various elements in what is one of Beethoven's most complex moments.

At the glacially slow tempo that Beethoven has indicated, this music in orchestral form sounds very much like some of Mahler's adagios, 75 years before Mahler composed them.

Of the five sections, the odd-numbered parts are the Holy Song, in three variations (I call them A1, A2 and A3.) The contrasting even-numbered sections are both Andantes, two versions of the same music, entitled 'Gathering New Strength.' Thus, the form of the entire movement is based on the rondo principle: A1, B1, A2, B2, A3.

Of great importance is that the entire character of this work is personal worship. It is not linked to Christian liturgy, like Beethoven's masses or Christ on the Mount of Olives. It is a declaration of his most profound beliefs, the musical equivalent of the Heilingstadt Testament. It is also the purest expression in all of music of the power of wellness to stimulate artistic creation.