By: Charles Wesley
For: Voice + keyboard
This music is in your basket
View basket
Loading... 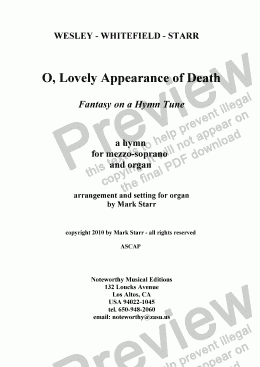 By: Charles Wesley
For: Voice + keyboard

The text of this morbid but eerily beautiful hymn was written in 1760 by the Reverend George Whitefield. It was specifically intended to be sung at his own funeral.

Rev. Whitefield (whose name was/is often misspelled as Whitfield) was born in Gloucester, England in 1714, and - significantly - died in 1770 in Newburyport, Massachussets. He was an itinerant Anglican minister who was one of the prime movers behind the Methodist Great Awakening, both in Great Britain and the British North American colonies. His evangelism and preaching played a significant role in the 18th C. American movement of Christian revivals. Like his contemporary and friend, Jonathan Edwards, he was a celebrity preacher - not unlike those we see on late-night television today. There are newspaper reports of him preaching before crowds of more than 20,000. This was in the days before microphones.

Whitefield was also a vocal advocate of slavery, and a slave-holder himself. His defenders write that he was benevolent to his slaves. They also claim his slaves were devoted to him.

In 1760 while in the American colonies, Whitefield wrote the text of a hymn, which began "O, Lovely Appearance of Death." He sent the poem to Charles Wesley, a co-founder of Methodism in Britain, and the composer of more than 6,000 hymns. Wesley set Whitefield's text to music. As far as I know, only the melody for this hymn exists. It was collected by Alan Lomax of the Library of Congress. If Wesley harmonized this melody, I have not found his harmonized version. I have harmonized the tune, which is in the Aeolian mode, in a manner reminiscent of both the Early American shape-note hymns and Samuel Barber's Adagio for Strings.

Upon receipt of Wesley's tune, Whitefield directed that 'O, Lovely Appearance of Death' be sung at his funeral (which took place ten years later.) Soon after September 30, 1770 (the day of Whitefield's death, the hymn was indeed sung over Whitefield's corpse, after the delivery of 'An Elegy on the Death of the Rev. Mr. George Whitefield,' by John Holt of Bristol. The elegy, spoken ex temporare, began: "Lo! ere the stars their feebler twinkling lose…"

I first heard this hymn in the 1960s, sung by the incomparable Hally Wood. The memory of her pure voice still lingers in my inner ear.

There is also a version of my setting arranged for flute (or violin) and string orchestra.

My arrangement and setting, subtitled 'Fantasy on a Hymn Tune,' is dedicated to the victims of the Servant Girl Annihilators in Austin, Texas, 1885.

In addition to listening to the hymn in Basic MIDI sounds while viewing the score, you can also listen to a demo recordings in MP3 format, realized with enhanced musical sounds. To hear (or download) the MP3 file, just click on the button marked 'LISTEN TO THE MP3.'

I hope listeners will express their opinions about 'O, Lovely Appearance of Death' and my arrangement of it – either in an online review or in an email to me (just click on the button marked 'EMAIL THE PUBLISHER.') I am always interested to read the comments of those who listen to my compositions, arrangements and orchestrations.

Reviews of WESLEY - WHITEFIELD - STARR; O, Lovely Appearance of Death (Fantasy on a Hymn Tune) arranged by Mark Starr for mezzo-soprano and organ