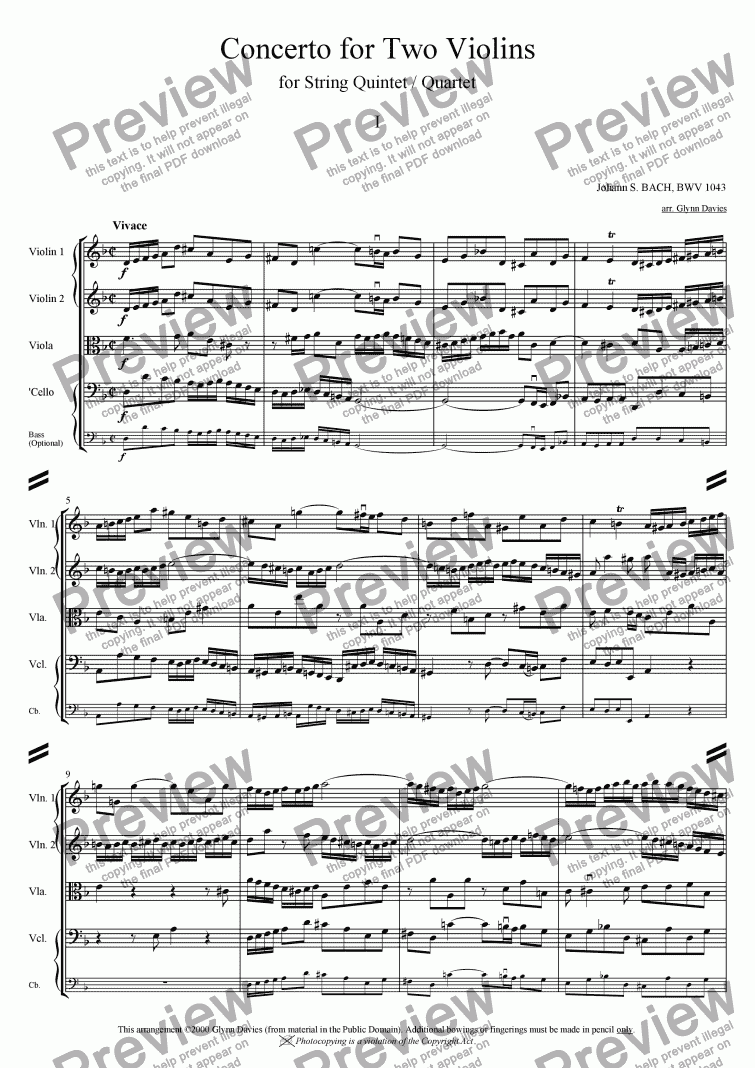 Composer
Johann S. Bach
Year of composition
1731
Arranger
Glynn Davies
Difficulty
Difficult (Grades 7+)
Duration
4 minutes
Genre
Classical music
License details
For anything not permitted by the above licence then you should contact the publisher first to obtain permission.

This music was composed at C?then between 1717 and 1723, and very likely first played by Joseph Spiess and Martin Friedrich Marcus with Prince Leopold's court orchestra. At C?then Bach had no organ to play, despite his pan-German reputation as a virtuoso on that behemoth among Baroque instruments. However, he was proficient as well on the violin, the viola da gamba, and of course the clavier. Without his first choice available, or church duties such as Leipzig demanded later on, Johann Sebastian concentrated on instrumental music in various combinations ? much of it subsequently lost. Along with the Brandenburg Concertos as a set, only two more concertos for solo violin and the D minor for two violins survived out of who knows how many, beyond the ones Bach rewrote at Leipzig after 1729 for one, two, three, and four claviers. All of his concertos, Brandenburgs included, had Vivaldi as their point of departure, and some were even transcriptions of the Italian master's works. Bach's genius was, of course, that he could individualize as well as transcend the music of a man indirectly his mentor. His works hadn't the sensuality or esprit of Vivaldi's; Bach was German Lutheran, bound beyond climate and environment by a religion that denounced the secular excesses in which Roman Catholicism (as Luther viewed it from within) had wallowed since the Middle Ages.

The first movement is arranged here for standard string quartet, with an optional bass part.

Reviews of Concerto in D minor for 2 Violins - 1. Vivace